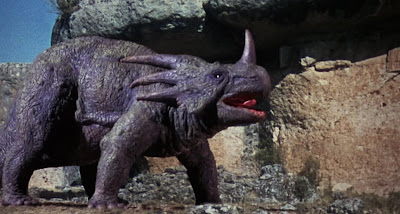 Today's film is a dinosaur Western which really frightened me as a child.   The setting, according to a slide at the start, is 'Somewhere South of the Rio Grande.......... Around the turn of the century'.  I'm not entirely sure where or what the Rio Grande is* - I've always assumed it to be pretty-much the same thing as the Alamo or the Grand Canyon, and this movie does nothing so salve my ignorance.  Anyway, it's cowboy time in cowboy land.  There's a cowgirl (Gila Golan) who does horse-related stunts for the circus, and she really talks a good sass: 'Trouble!' she says, 'They say it comes in threes.  I wonder what the next two will be.'

The recipient of this brazen greeting is  James Franciscus.  Oh, you know - he's the man in 'Beneath the Planet of the Apes' (1970) who isn't Charlton Heston, because Charlton Heston didn't want to do a sequel.  Well, he's just as Heston-y here to an extent that verges on impersonation.  It's something about the way he shows his teeth when he's listening.  The real star, though, is Ray Harryhausen, master of stop-motion creatures.  His are the dinosaurs, but before we get to them...

'El Diablo' is a very nice tiny horse, the size of a household cat, with a waggly mouse-tail.  No screen-capture can adequately express his sweet and tender motions.  This slightly capybara-esque animal is an 'eohippus', an ancestor of the modern horse.  It's a charmingly sleek creature, and for quite a while it seems that the film will be all about El Diablo's antics.  The best thing about the film's first half is the solemnity with which the cast keep saying the words 'little horse'.    A blind Latina woman gives terrible warnings about it: "I tell you, unless the little horse is returned we shall all suffer the curse of hell!"  She believes the film's dinosaurs are not just giant and hazardous but actively evil.  The little horse is merely their harbinger.  "Superstitious claptrap!" says the British professor, "There's nothing hocus-pocus about that little horse!"

And so we get into the adventure.  A valley of LIVING DINOSAURS is uncovered, and a child is carried off by a sparkly magenta pterodactyl, but a rodeo cowboy manages to wrestle it to death.  All the dinosaurs in this movie are purple - except in scenes with more than one at a time.  There's a fantastic dinosaur-on-dinosaur fight between Gwangi, the purple Allosaur who is also a T-rex, and an unnamed purple-sometimes-but-green-in-the-fight Styracosaurus.  It's probably the best dino-on-dino fight I've ever seen - no quick cuts or urgent editing, just fighting and biting and blurts of blood.

Finally, the scene came that haunted me in my youth.  I remembered it very vividly: the dinosaur has been put in a cage, covered by a tent, ready for its reveal to the world.  A young child sneaks into the tent and is torn apart by the dinosaur, and the tent is opened at the crucial moment, allowing the crowds to see the horrendous death.  As a six-year old this really shook me up.  Children aren't normally killed in films - not with this sort of brutality.  Watching again, I realise it's not a child, but a dwarf - a Latino dwarf who we've already seen acting violently towards the heroes, so it's kiiind-of okay to see him meet this grizzly end.  Nonetheless, when I saw this back in 1990ish, it was the scariest thing I'd seen in my life.  Of the horrors I've seen since then, I wonder which I found the most frightening.  What has toppled Gwangi's wrath from its position at the top of my nightmares?  9/11, perhaps?  The rise of xenophobia and the fall of compassion in 21st Century Britain, or perhaps the bit with the raptors in the kitchen from 'Jurassic Park' (1993)?  Who can say.

The climax of the film likewise lodged in my child memory: the townsfolk flee into a cathedral, and the giant dinosaur chases them, biting people in half.  The crowds find no sanctuary, but the dinosaur ends up trapped inside the cathedral, where a fire breaks out, and it burns to death, screaming in agony.  The crowds watch with a tense, silent sort-of sadness, as the building burns to the ground.  And then the film is over.

Like the last time I tried to face a childhood terror - returning to the York Dungeon after twenty years - I expected to find the situation pretty mild and amusing, and the old fear risible.  In both cases I actually found the revisitation weirdly upsetting, at times verging on distressing.  Consequently, I had a much stronger reaction to the end of this film than I feel it merits.

I'm really not sure whether this film is good.  It's certified 'U', so you should probably show it to your infants and see what they make of it.

P.S. This really couldn't be much more different from the other 1969 film I watched, 'The Bed-Sitting Room'.  I think they would make an astonishing double-bill.

P.P.S. *Let's pick up that dangling asterisk!  I don't like to languish in ignorance, so I've looked up the Rio Grande.  It's a big old river, running from the Southern States into Mexico, and coming out at around-about the spot where the asteroid/space-freighter hit the earth, thus destroying the dinosaurs.  Where, then, is this movie set?  'South of the Rio Grande' is all we're told.  South of which part?  If it's South of the Northernmost source of the river, the film could feasibly be set in Omaha, Ibiza or Kurdistan.  If it means South of the entire river, that opens up anywhere from Monterey and Mecca down to the South Pole.  Decide for yourself!
Posted by Ben Swithen at 22:00 No comments: