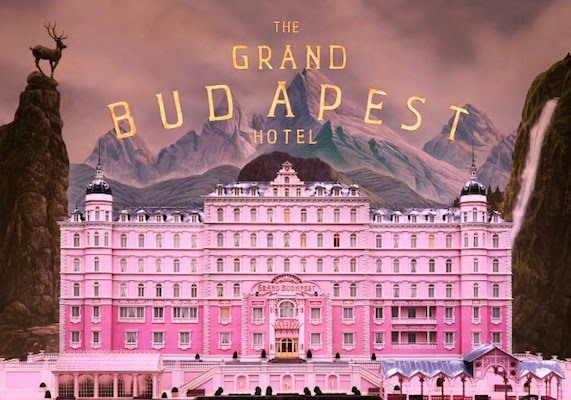 By merit of having gone to the cinema twice this year, I've already seen far more films there than I did in 2013.  I'd gone to Scarborough to present my grandmother with some lime-and-raspberry vodka conserve, and on the way back my parents (who were in the area) suggested we go to the movies.  They ventured either 'Gravity', which seems to be the talking-point of the decade, or 'The Grand Budapest Hotel', about which I knew absolutely nothing.  The latter had the advantages of being 2D, and hailing from 2014, thus making it eligible to fill a gap in my 102-films-from-102-years blog, as it has seemingly now become.

I came in with no preconceptions, not knowing the genre, director or stars.  The last time my mother compelled me to watch a film about a hotel I saw 'The Best Exotic Marigold Hotel' (2012), which was nice, but left me with mixed feelings.  I expected something along the same lines, but found a film far more fun and exciting.

If you've been following the Penciltonian from the start you'll know that I have a thing for colourful films, anything that leans heavily into rich colour, stylised design and symmetrical shots.  Such things are here in well-saturated abundance.  There is nothing more this film could do to excite my eyes.  It even has a funicular railway, my transport of preference.

The content of the film follows suit, a ridiculous, heightened escapade.  It has something of a Roald Dahl or Edward Gorey grotesquerie, and the kind of 1930s adventure I enjoy in Tintin and its ilk.  There's a particular liveliness and gusto that leaves it feeling like a children's story for adults, with the only real reminder of the intended audience being the sweary exclamations that leap out of otherwise genteel conversations.

There's a fantastic energy to it, abetted by Alexandre Desplat's musical score, which seemed to be a star in its own right.  By turns jazzy, jaunty and apocalyptically ominous, with a bevy of Balalaikas to match the faux-East-Europe of the film's Zubrowka.  I suspect that both film and its soundtrack will have my attention many more times over the course of my life, as they currently leave me enthused and delighted.

P.S. Since there were no up-front credits, I spent the whole film feeling that I recognised the lead actors, but unable to place their names.  They were, in fact: Voldemort from Harry Potter (2005-2011), The Pianist from The Pianist (2002), Jesus Christ from 'The Last Temptation of Jesus Christ' (1988) and New Jersey from 'The Adventures of Buckaroo Banzai Across the 8th Dimension' (1984).  And, of course, some young actors who aren't yet famous, but probably will be.
Posted by Ben Swithen at 17:52 No comments: