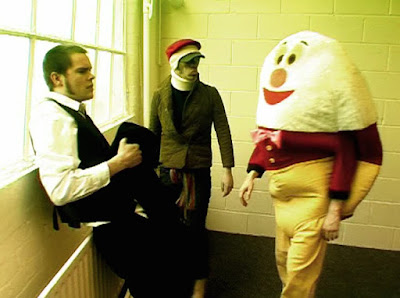 Today I’d like to comment on an obscure student-film by someone who became famous for something else - ‘Man Alone’ is an ambitious piece of juvenilia directed by Jonathan Higgs, lead singer of British art-pop/electronic-rock band Everything Everything.  If you’re not familiar with the band, I can only recommend them: I harbour a burgeoning enthusiasm for their three albums, and I was fortunate to get along to one of the concerts of their current tour this weekend.  It’s prompted me to revisit this film, which my aunt passed to me about six years ago.  In those days the band had only put out their debut album, the similarly-titled ‘Man Alive’ (2007).

The director co-wrote this with Tom Astley, who I’ve found to be mysteriously ungooglable.  It shares quite a bit with senor Higgs’s musical career: for one thing, it regards humanity’s violence, self-destruction and numbing materialism - familiar topics from 2009 single ‘My Kz Ur Bf’, (which juxtaposed the America of war with the America of soap-operas), and large tracts of their 2015 album ‘Get to Heaven’; for another thing, the film contains a number of songs, some of them featuring fellow band-member Jeremy Pritchard, (presumably on keyboards, bass and backing vocals).  These songs are sadly few and far between, but they show off the singer’s ingenuity and falsetto, albeit in fairly crude forms.

The story opens with a song - one of five, which acts as its main info-dump: after world war 4, culture has become homogenised, and history has been banned.  The story begins after about 40 minutes, when God turns up, with an appearance which I will not attempt to describe for you.  He arrives in an extended flashback to a Scottish monastery in Roman times.  God speaks like a vocoder - sometimes beautifully, sometimes like an 80s Cyberman.  He occasionally uses ‘thou’ to mean ‘thee’, and declares that Jesus has failed, and that His second son, Timorous, must be raised in utter silence.  But as narration tells us, ’Timorous had a dark secret, the discovery of which changed the future for all mankind'. After a few minutes of monastic backstory, the story returns to the future, and switches to a hunt for a lost holy tune (like the lost chord, but hidden in a Roman latrine under a Horse of Truth), and God’s second son is ignored entirely - not so much as a mention - for the next hour.

Once the lost tune is found, it isn't really clear what we should hope for or expect from the remaining half-hour.  The main character goes on a bloody rampage for reasons that I didn't quite grasp.  Like a lot of the film, it reminded me of  ‘Na Srebrnym Globie’ (1977), a bleak, violent Polish sci-fi - in both cases I didn’t really understand what was happening, but knew that was probably my own fault for not paying close enough attention, but that was the film’s fault for being very long and difficult.

The movie is two-and-a-quarter hours long, which is astonishing for a very-low-budget amateur work.  Back in the early 2000s, I knew a lot of people (some of whom were me) who talked big about shooting and editing a feature-length movie, so senor Higgs and his production team deserve credit for sheer persistence.  There are, of course, problems with very-long films by the bold and ambitious.

The film does astonishing things, but rarely in a way that any audience would ask for.  It achieves this on some fairly basic equipment - the sort of sound and picture quality you might expect from the end of the last century, compounded by some audacious colour-grading in post-production.  However, in contrast to most student films, it’s all splendidly focussed.  Individual shots show great promise and style.

There are genuinely interesting ideas behind the story, and a good ending.  I get the impression the thing was made in a very different order to the way that they're presented, and that the writers and cast had a change of heart about the kind of film they were making part-way through - at times, the script and performances believe themselves to be in a very broad comedy; at others this is a dour monastic horror to be taken as seriously as possible. Scenes of the delicious and delightful are interspersed with full hours of exposition, wondering and impotent crossness.  I wish the tone could have been more consistent in one way or another.  When it was all working, it reminded me slightly of 'Southland Tales' (2006), with its bizarrely satisfying mix of styles to present an action-packed near-future satire.

I do think there's a fantastic shorter film to be had here feature to be had here.  Jonathan Higgs went on to direct his own music videos, so we can be sure he has the necessary talent and vision, when he doesn't have to fill this kind of duration.  If it had been made a bit later, further into the Youtube age, this could have been broken into episodes; it's a fairly episodic storyline, and would be easier to palate in smaller chunks, and it could have made a merit of its developing tone.  Then again, perhaps I'm missing the point, and wanting an avant-garde film to be more accessible.  At this level, it's hard to know what parts of the production are deliberate art, and which are just convenience.

I'll reiterate the good points - the songs are excellent, and their proto-Everything-Everything sound is the film's great merit.  There's some good comedy, and some memorably bizarre scenes, as when the hero is beaten-up by a giant egg.  The film's very existence is impressive, and the film contains some good ideas and reveals.  The end - in which the hero suffers agonies for the chance to redeem humankind, but chooses not to - is a strong, well-presented concept, and I can see why so much of the rest of the film was produced to give it context.


P.S. To the best of my knowledge, this film is available to watch nowhere.  I've written about it here largely because it's a curio, and I think some people might like to know that it exists, or existed, even if they can't see it.  There's little or no information online about this film - perhaps it's been deliberately blotted out.  According to the closing credits, the soundtrack used to be available on CD.

P.P.S. I'm still unsure whether the film is 'Man Alone' because a man is alone, or because man, alone, is responsible for such depravity, or because the casting is overwhelmingly male.  'Man Alive' is much easier to grapple with, and much more rewarding.
Posted by Ben Swithen at 10:25