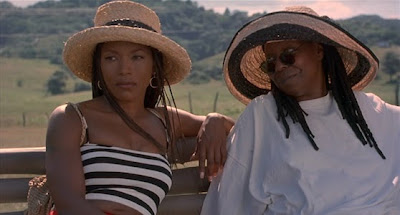 Since first hearing of this movie some decade ago, two questions have plagued me: how did Stella get her groove back, and what the heck happened to her groove in the first place?  I'd always imagined it something like the following year's 'The Spy Who Shagged Me', in which Austin Powers loses his mojo and has to retrieve it from a fat bastard - but even more groovy, should such a thing be possible.  My hope here was that 'a man' wouldn't be the answer to both questions.  The film, after all, has an overwhelmingly female cast (though not to the extent that most of the films I've watched have had overwhelmingly male casts), and stars Angela Bassett and Whoopi Goldberg, the latter of whom I've always found to be extremely watchable.

Stella is a brilliant businesswoman, rich through hard work and discipline.  She seems content, she's confident and independent, and is a single mother to boot - but her sisters believe she ought to be dating, and her son doesn't think she takes the time to have fun.  So, Stella does something uncharacteristically crazy.  She goes on holiday to Jamaica (no, she went of her own accord) with her best friend Delilah, and accidentally falls in love with a handsome guy.  He's twenty, and is also twenty years her junior.

The guy has an excellent name, Winston Shakespeare, and is played by Taye Diggs.  He and Angela Bassett give performances which seem independently excellent, but I never quite got the chemistry between them.  This is meant to be a great and complicated romance, but they somehow never seemed truly in love.  This is a particularly ruinous to the movie, as the age-difference creates a gulf between the characters, and the film spends almost its whole duration on the question of whether they can overcome these differences or whether it's better for them both to go their separate ways.  I was rooting for the latter option, since it seemed to be a better way for Stella to keep her independence (which I'd assumed to play a role in her eponymous groove) and for Winston to get on with his own life - but I'm not sure mine was the intended response.  Had their relationship looked deeper, more than a fling of physical passion, I think the central conflict would have seemed far more credible.

Crucially, for a movie that wants to tell us that it's not OK to be happy being single, the film never makes romantic love look much fun.  Stella's doing fine at the start of the film, and only starts to doubt herself when her peers demand that she should conform to a traditional female role, and once she's found romance they start demanding that she acts her age, and she starts to insist that Winston acts like a man, all as per society's norms.  It seemed to me that Stella's groove was her independence, her ability to be herself and not have to act in the way our current society demands.  Once her friends and relatives made her doubt herself, and urged her towards their view of normality, I'm not sure she ever got her groove back.

Here it is on DVD, in case you're curious.