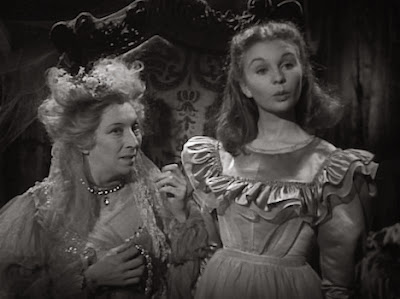 I'd meant to watch David Lean's 'Oliver Twist' (1948), but put the wrong disc in the machine and watched this instead.  I would have been happy with either, and I'm glad, as I know this story less well, to the extent that I'd forgotten a number of twists towards the end.  I very much like Dickens, despite having read very little of his work.  I like his stories, which I have seen adapted often enough to convince me of his merits as a storyteller, and I like his titles, his name, his face and his beard.  I have read 'Great Expectations' (though I always feel compelled to call it 'Great Big Expectations'), and I've read 'A Christmas Carol' more than once, and delight in its phrasing.  'A poor excuse for picking a man's pocket every December the 25th!'

The story is slightly more Harry Pottery than I'd recalled: our hero is a young orphan being raised by an intolerable relative (though Mrs Joe is as much a Thenardier as a Dursley), before being visited by a large and scary man (the bald Abel Magwitch, rather than hairy old Hagrid) and offered escape from his uncomfortable and rather tedious life.  In each case he comes into an unexpected inheritance and is urged to travel to London and get himself some decent clothes.  Pip becomes a lawyer, not a wizard, and his battles are (mainly) less violent than Harry's, but as a backstory it worked as well in 1860 as it did in 1946, and still gets the audience on-side today.

I've mentioned before how impressed I am by all the 1940s films I've been watching.  Every other decade has its duds, its highs and lows, but the six films I've watched from the forties have been uniformly excellent, with the talking picture now being well-enough established for the films to lack for nothing.  Forties film-making seems to have a particular style, with its academy ratio, its monochrome, its polite hair and well-spoken performances, and the stories told in the decade's films seem to suit this style extremely well.   This film makes a rather fine companion to the previous year's 'Les Enfants du Paradis' (1945), English and French films set in nineteenth centuries of comedy and sadness, gainful employment, crime, love and beauty.  I could say a great deal more about my love of that particular film, and a surprising amount of it applies here as well.

I praised the direction of David Lean's 'Doctor Zhivago' (1965) recently, and I'm content to say he had a considerable flair even this early.  Some flourishes are quite overt: a novel use of voiceovers to show Pip's memories of earlier scenes, or to put the voice of his paranoia into the mouths of a herd of psychomachiac cows, for instance; or a scene in which the shrill Mrs Joe opens her mouth to exclaim, not in words, but in parps and blurts of incidental music.  Other touches are subtler, for instance when there's a change of actor in the lead, as the child Pip (Anthony Wager) is replaced by the adult Pip (John Mills) - we hear our grown-up protagonist before we see him, and watch the shadow he casts while working the forge with Joe before he's eventually summoned before the lens.

Because it's Lean at the helm, naturally there's a role for Alec Guinness, who I've learnt to expect in dramatic roles, but who here plays the comedic role of Herbert Pocket, a camp young fellow with whom Pip lives most happily.  It's wonderful to see such a different, such an energetic performance from Guinness, but it's curious to see him in so relatively minor a role.  Later in his career I'd expect to see him playing, if not Pip, perhaps Miss Havisham, though I would not mean to wrest the role from Martita Hunt.  She gives a terrifyingly strong performance of an excellent character: Miss Havisham sits, resplendent in cobwebs like some Wintery queen of Narnia.  She says she has sick fantasies: to be precise, a desire to bring in children to have them break one another's hearts.  She's a horrid sort, and garners too little redemption too late.