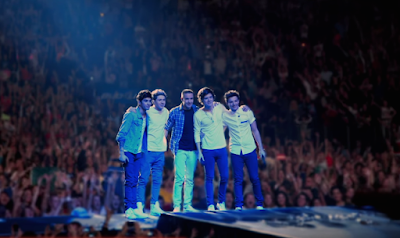 One of my lodgers is a big fan of One Direction.  At first, she got into them ironically - this is the age of memes, so this is one of the most comfortable ways to enjoy low-brow art - but when her aunt got her concert tickets, and she went to see them perform, she was won over entirely.  You see, there’s something magical about Harry Styles.

Tea, in our house, is drunk from One Directon mugs.  I had to learn the basics of One Direction so the three of us could play ‘One Direction: The Board Game’, some of which requires rudimentary trivia knowledge.  Thus, I know the boys’ names and former careers, and can name the band’s first perfume.  My lodger's fiancée, who happens to be my other lodger, made her another One Direction game - a 1D version of Munchkin, that modern classic.  With almost 180 hand-designed cards, playing ingeniously on the band's lyrics and antics, it's an astonishing creation, a labour of love.

This Christmas my lodgers gave me the unauthorised biography of Zayn Malik, the handsome bad-boy of the group, the traitor.  This is not a book I ever desired, but I’ve been reading it, picking up the story of their X-Factor journey.  It’s a pretty poor biography, but not the worst I’ve read* - evidently it was written as a catch-all One Direction book, with a few tweaks to increase the mentions of Zayn, released to tie in with his surprise resignation.  An awful lot of it is statistics and speculation on what band-members were surely or probably thinking or feeling at any given moment.  I suspect that Zayn was the most talented of the five band-members, and I’ll be interested to read a more human biography of him in a decade or two, when we’re allowed to know the truth.

I’ve become rather intrigued with One Direction.  I’ve ended up knowing about as much as one could about a band without listening to any of their records.  I’m especially interested to see the results of their hiatus (announced in August 2015, and in force since October).  The five boys all entered ‘The X-Factor’ aiming for solo careers, so we’ll find out what happens when they get what they wanted.

Harry has the style and charisma to prosper, regardless of his next move - and Zayn, who quit first, matches him for handsomeness and prospects.  Niall is beloved by his native Ireland, but I worry for the fate of Louis and Liam.  They can’t all become superstars in their own right.  This might yet prove to be a band with four Ringos.  I expect some of them to follow the band’s aesthetic of confident, glossy pop-rock with hint of autotune - a popular sound which has served them well.

But will any of them do something interesting?  One Direction, though sold as a wonderful party, has always been a very heavily managed band.  Will Zayn give us something more personal and human?  Will we get past the plastic packaging, to a raw wound?

For comparison: The Beach Boys are the other band that I really care about (out of proportion with my love of their music, which is sometimes great but mainly not).  Brian Wilson escaped their dominating management, and recorded some of his most honest (and alarmingly melancholy) works as a soloist, but then fell under the sway of an even more oppressive producer (and for the rest of that story, I’d recommend watching 2014’s ‘Love and Mercy’).  His brother Dennis Wilson produced his own solo album, ‘Pacific Ocean Blue’ in 1977 and it was far better than anything the Beach Boys would have dared release at the time.  Carl Wilson had a good voice, but nothing to say, and Mike Love never got around to releasing his ‘Mike Love Not War’.  It wouldn't have lived up to the promise of its title.

So perhaps my real question is: will we finally find out which of the One Direction boys are sad, and in trouble?  It feels a vulgar, voyeuristic sort of question, but sometimes I want some truth in my music.  I would like to feel something.  Sometimes I feel very sad, and if these world-famous recording artists could give me something to hold onto, something to feel with, and about, perhaps that would be good for me, and good for them too.  They have so much talent, and this is their chance to say something real.

So, ‘One Direction: This is Us’ is the band’s 2013 film.  It’s directed by Morgan Spurlock, best known for ‘Super Size Me’ (2004) which I haven’t seen, and ‘The Greatest Movie Ever Sold' (2011), which I really enjoyed.  On the basis of that, I had high hopes for ‘This is Us’.  It’s certainly engaging, a well-told story, and it keeps the attention (even in the extended fan cut).

It’s fun, it’s clean, it contains no surprises and no great drama.  The two most dramatic events in One Direction’s history - Zayn Malik’s surprise resignation, and their decision to go on semi-permanent ‘hiatus’, happened after this film had been made.  This is a movie about some nice boys for whom things get better and better.  It's boringly pleasant.  There’s a great story to be told about One Direction, but it won’t be told for another decade or two.  When the contracts are ended, and everyone can look back and be honest, then their happiness will seem more sincere.  They'll be allowed to be themselves.  I'm sure that's what they were doing here - but only within permissible confines, and edited in accordance with their management's wishes.  This is their image.

It’s a film with two ambitions, and I think it fulfils them both.  First, it’s intended to make money (which is also the primary purpose of One Direction).  Secondly, and more generously, I think this was an attempt to give something, some kind words, back to the fans.  There are numerous stories from the band about how the fans love them, how the fans care, and write to them, and about them, and how they wish they could talk to every fan individually to return that warmth and affection.  I think the film is an attempt to do just that.  It’s not the most personal medium, but on this occasion it succeeds to the extent that it can.  So, that’s nice.


P.S. If you're following the asterisk to find out the actual worst biography I've read, that's probably 'Michael Faraday: Spiritual Dynamo', a charming and terrible work.  It tried to relate all of Faraday's discoveries to his Christian faith, but it didn't have any quotes from him to back this up, so it spent a lot of time saying certain things were probably or surely or maybe inspired by it - I suspect the author chose their title before they did any research, and then realised they were working on a bit of a false premise.  It also tried to attribute a lot of other people's inventions to him, on the basis that he was in the same city at the right time, and must have been involved.  It also tried to disguise lists of facts as crowd-scene conversations.  I don't have the book now, but it had an awful lot of 'I say, said a man outside Michael Faraday's House, I've heard Michael Faraday is inventing such and such a machine.  Gosh, said a woman, I additionally heard that these are some specifications of it.  If that's so, evinced a young paper-boy, then I'm sure it will have sold between four and five thousand examples within an eighteen month period'-style dialogue, which was at once risible and delightful.  'Zayn: A New Direction' was not a million miles from this style.
Posted by Ben Swithen at 19:47