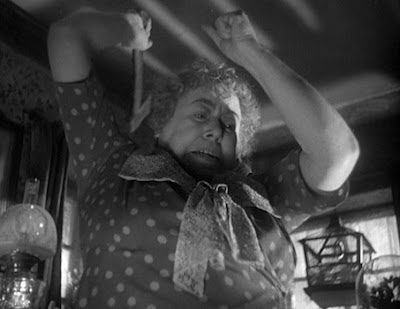 This time last year I watched 'Went the Day Well', a brilliant film about a village which slowly realises it's been the bridgehead for a Nazi invasion. When I started watching 100 years of films for The Penciltonian I thought it a pity I'd watched it so recently, as I truly can't imagine anything could better stand for 1942.

Well, here I am watching it again.  I'm up to the forties in my viewing of 'Heimat' (1984), and this weekend went to a 1940s fayre at Kelham Island Museum, so found myself with an ample appetite for such a tale of the Home Front.  It's charming, genuinely dramatic and utterly British, without being grotesquely so.

The film opens with a man talking directly to camera, showing the audience around a churchyard.  The events of the film are history: it's peacetime, and the war is over after 'Hitler got what was coming to him'.  The man clues us in to what's coming - that this is the only piece of British soil the Nazis captured.  We spend the remainder of the film in a flash-back, that we might see how this invasion came to occur and be beaten.  What seems to modern eyes a historical 'what if' would have seemed alarmingly plausible at the time.  The film was made in 1943, when this sort of invasion was still very much on the cards, and victory in World War II was not inevitable.

The first scene assurance that we win, both the war and the battle of Bramley, gives the impression that everything will tend toward triumph, that we're in for an optimistic tale in which the Brits trounce the Jerries at every turn.  On the contrary, the charming village suffers moments of unspeakable violence, as the merry home guard are mown down by machine gunners, and in return, as good humoured people of the village take what crude arms they can against the foe, even when it will clearly cost them their own lives. Again and again, people we like, main characters who look set to make it to the end, just die - sometimes protecting others, sometimes futilely, failing to deliver the news to the outside world. There's a constant tension between the agreeable pluck, the Blitz spirit, and the brutally serious nature of the war. Watching this at the time would have been encouraging in part, but terrifying.


I'm surprised 'Went the Day Well' isn't more often spoken of, as I'm inclined to value it very highly.  I hadn't heard of it at all until my friend Rob (who also recommended as 'Taxi Driver' for 1976) told me it was something I would particularly enjoy.  Perhaps it's just a film that tends to my own specific tastes, but I doubt its appeal is really that limited.  So why not watch it, and spread the word?

It's an excellent film, and you should totally watch it.  See what Thora Hird looked like in her youth, why not?