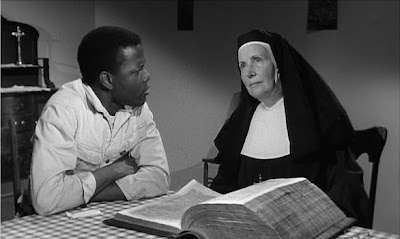 One of the regular listeners to my weekly radio show - though to my great discredit, I can't remember which listener - recommended this as a film I might enjoy watching.  I'd been talking about The Penciltonian, and this recommendation, while the synopsis sounded rather unappealing, filled a 1963-shaped gap in my plans.  It's a significant year, as it marks the midpoint between 1913, my earliest limit, and the present day.  Thinking about it, it may also be the last year when I'd expect films to be in monochrome.  Oh, there've been plenty in colour, including an unlikely outlier in 1903, and in earnest since about 1939, but colour has always seemed an exception to a rule, a mark of something expensive and glossy.  From 1964, though, everything will be in colour unless it has a good reason not to be.

So anyway, there's this guy called Homer.  He's driving through the wilderness of America when he's stopped by a gaggle of East German nuns, who tell him they've been praying for a man to come and work for them.  He just wants to continue on his way, but the nuns are very insistent.  And after the first day of roof-mending, they tell him they want him to build them a chapel.  He doesn't want to build it, of course.  He wants to drive on, get on with his life.  Every character he meets agrees with this, and tells him to move on, not to get involved with the sisters.  But every time they tell him he should leave, Homer finds himself more compelled to stay and do the work.  The complicating factor is that the nuns can't pay him, and the Mother Superior, an extremely stubborn woman with a tragic history, won't even thank him.  Homer just wants to do an honest day's work in exchange for a decent day's pay.  Or perhaps it's slightly more complex: he wants to do something worth doing, build something worth building, and have his work properly recognised.  He's a jobbing contractor, but not without artistry and pride. 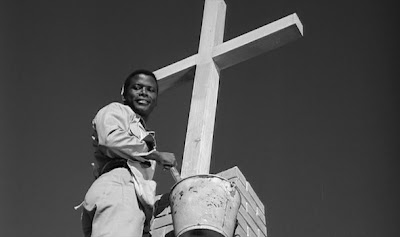 There's something excitingly liberating about Homer Smith's predicament - the idea that you could stop in the middle of nowhere and work there as long as you want to, be employed and fed, and sleep on the ground each night, with nobody awaiting your arrival at the far end, no obligations to tie you down - with nothing to your name but a car, a set of tools and an eagerness to work.  Sidney Poitier plays the part scintillatingly, and won the year's Oscar for best actor, though he apparently believes he didn't deserve it.

Inevitably, Homer is persuaded to work on the chapel - that's never really in any doubt, or there would be no film.  The question is really how he and the nuns can come to some compromise.  He's a man of action, a Southern Baptist, an American, and he takes his Sunday as a day of rest, and a chance to have a damn fine breakfast (which he describes in exquisite detail), while the nuns are strict Roman Catholics, keeping their silences and singing in Latin.  He buys them lollipops, teaches them English and livelier worship songs in the Baptist style.  It's a very enjoyable relationship that grows up between them, and I particularly enjoyed a scene in which Homer and the Mother Superior leaf through a German and an English Bible, using scriptures to argue over whether or not he deserves to be paid for his labours 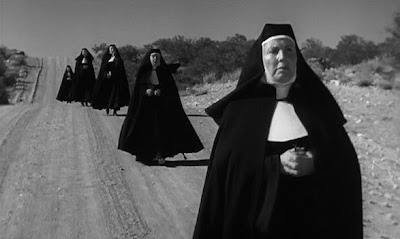 They need him a lot more than he needs them, and this leaves the film with something of the feel of a Western, with Homer as the stranger who rides into an isolated community and fixes the problems before disappearing off into America more-or-less unchanged.  It's a fine film, heartwarming and with some excellent dialogues and really nice scenes.  I can well see how a listener might think it would suit my tastes, as it's really very Christian, in that it's a conflict between two denominations who both celebrate God but express their faith through remarkably different lifestyles.  Homer is very casual but very passionate, his relationship with God personal and joyful, while the nuns are far more formal, but entrust their whole lives to the power of prayer.  It isn't an aggressive message, nor does it come across as twee, though either could have been possible in a less competently-made film.  As it is, I found it a pleasure to watch.  And it's not a minute too long, either, which is always to a film's credit.

The film on a disc.  Don't be put off by the charmless front cover.