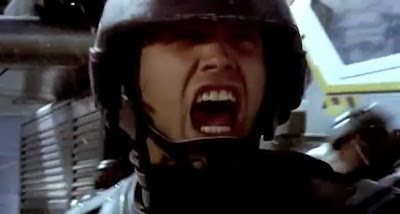 Rounding out the nineties, we have this excellent sci-fi satire, an anti-war-film disguised simply as a war film.  It drifted into my mind a couple of months ago when I watched 'All Quiet on the Western Front' (1930).  The stories follow similar patterns: in each, a school-teacher inspires our hero to join the army, the better to be a patriot, and both films show a gruelling period of training under a hostile drill-sergeant, which nonetheless leaves the cadets unprepared for the real horrors of battle.  The war drags on for far longer than expected, and the hero watches all his peers perish in agony.  I can believe there are plenty of other anti-war films that follow the same pattern, but these are the two I know, and despite their similarity in plot and purpose, they use very different methods.

'Starship Troopers' is subtler, or at least, it credits its viewer with more intelligence.  It drops the occasional hint that humanity are the real aggressors, and that the 'bugs' whose planets they are invading are only defending their territory, but it makes the aliens ugly enough, and the battles exciting enough, that one could watch the film without realising the cruelty of the heroes, the sarcasm of the jingoism.  'All Quiet on the Western Front' opens and closes with clear anti-war statements, and its hero loses faith in the struggle, speaking openly against its futility - but the horrors experienced by Johnny Rico (Casper Van Dien) in 'Starship Troopers' leave him all the more committed to the bugs' extermination.  He's a true citizen.  'All Quiet on the Western Front' makes its point with tragedy, but 'Starship Troopers' gives us a happy ending, a triumph for the surviving characters.  Its far more bitter, and terribly unfair.

It's an attractive, fun and thrilling film.  If you can put the grim moral aside, it's highly entertaining, something you can watch a lot of times.  The film was fortunate to be made at exactly the right time, in 1997 special effects had become so good that they still impress today, with CGI 'bugs' and ships looking both real and solid.  Made a few years earlier, I suspect this would have aged poorly.  Five years later, I doubt the film could have been made at all, as the extremely negative portrayals of propaganda and American-style extreme patriotism would, post-9/11, have rankled against the public mood.

I'm told the film is extremely different to Robert A. Heinlein's novel on which it was based, and that the book, published in 1959, plays the war far straighter, with the monsters utterly evil, the heroes justified in their crusade.  It sounds considerably less interesting than the motion picture; the world needs the occasional warning about the evils of imperialism.  I always prefer sci-fi that doesn't advocate for national churlishness.