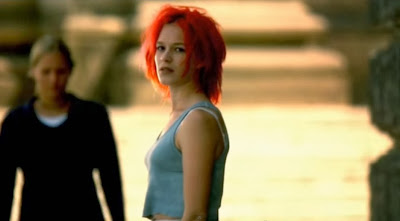 Since my Penciltonian project is nearing its completion, I've been looking over the list of films I've watched this year, and I realised that the 1990s was almost the only decade to be made up entirely of English-language films.  (The other decade lacking foreign-language cinema was the 2010s, but I have another 6 years to rectify that particular omission).  I knew immediately what I'd like to watch: 'Lola Rennt', or 'Run Lola Run', a sassy German film which pleased and excited me when I saw it half a decade ago, and which I'd very happily recommend to anybody who hasn't tried foreign cinema before.

Lola (Franka Potente) has exactly twenty minutes to rustle up 100,000 German marks to save the life of her jerk boyfriend Manni, played by Moritz Bleibtreu, who went on to play, with a more competent criminality, Andreas Baader in 'Der Baader Meinhof Komplex' (2008).  Lola has an excellent rage, a shock of red hair of the most enviable character, and a capacity to scream with such determination that glass and other weak things must shatter.

The events of the film last just over twenty minutes, but the film is almost an hour and a half in length.  We see multiple attempts by Lola to find and deliver the money, and when she fails she goes back to the beginning and starts again, like a video-game character trying new ways to beat a level.  Which way she goes, and what happens to each of the characters, depends entirely upon her timing: it isn't that she makes different decisions in the same situations, but rather that the situations are different when she gets there.  It all hinges on how quickly she makes it down some (animated) steps at the start.  A difference of a single second is all it takes to change many lives.

I'll certainly keep an eye out for more films from writer/director Tom Tykwer, who works with an attractive energy and flair, and casts even the smallest parts memorably.  I don't know why I haven't watched this film more often.  It's a cool, stylish movie, and a good drama.  It's colourful, it's attractive, has good characters, a pleasing techno soundtrack, and a lot of fun.  If it was in English, you'd all have seen it by now.