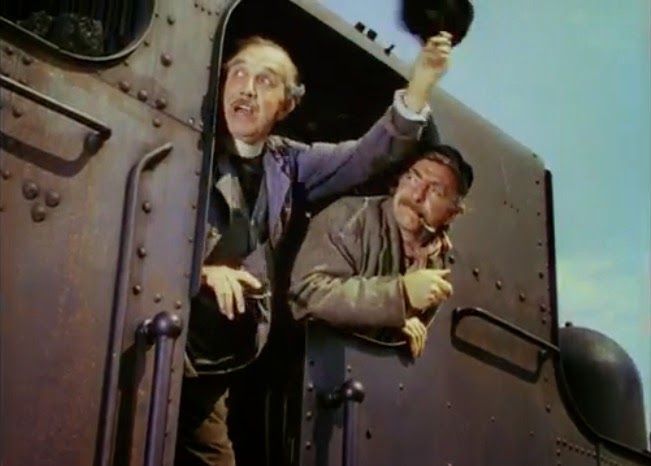 Having watched ‘Ben-Hur’ (1959) on each of the last eleven Easter weekends, I’ve developed something of an intimate understanding of it; tiny details that I didn't notice at first now seem obvious and familiar - a few odd seconds where a line of dialogue has been partly redubbed, or small quirks to actors’ deliveries, like Jack Hawkins decision to stress the first syllable of ‘reward’ (a word he says twice).  I’ve no great desire to learn about the film’s production, and I’ve never listened to its commentaries - but repeated consumption to get at the story has made its ingredients, its composition, even the performance of its most minor roles, seem like bosom friends.

This year I thought I’d spend a little time looking up the CVs of the film’s cast.  As long-term readers may recall, I’m already well-versed in Charlton Heston’s filmography, but I thought I’d look up what Haya Harareet and Frank Thring did next.  I’ve seen Finlay Currie as Magwitch in ’Great Expectations’ (1946), and the aforementioned Jack Hawkins as the man in ‘Bridge on the River Kwai’ (1957) who wishes to explode said bridge (though I’ll need to re-watch that film to see if he gets to say the work ‘reward’ at any point) - and we’ve all seen John Le Mesurier, a grim surgeon in a scene after the famous chariot race, as Sgt Wilson in ‘Dad’s Army’ (1968-77).

In my researches, I discovered a film which featured two of the cast of 'Ben-Hur’ together.   And the same day I learned about ‘The Titfield Thunderbolt’, it popped up on BBC4.  The movie stars George Relph, who had two scenes in ‘Ben-Hur’ as a rather avuncular Tiberius Caesar, a role in which he shows off his strikingly memorable teeth.  In ‘The Titfield Thunderbolt’, he plays a country vicar who decides to buy up a railway station to stop it being closed down.  He also drives the trains, accompanied in the engine by a surly poacher, played by Hugh Griffith, who six years later won an oscar as Best Supporting Actor, for his unfortunately blacked-up but otherwise highly enjoyable performance as Sheikh Ilderim, a major player in Ben-Hur’s second half.

So, let’s turn our attention to ‘The Titfield Thunderbolt’.  It is, in short, a nice film about a train.  Will the vicar and the poacher be able to run their train safely, and on time?  Will they be able to beat those villainous men from the bus company?  Probably!  It’s an Ealing Comedy, from the writer and director of ‘The Lavender Hill Mob’ (1951), so has a charming humour and a particularly British gentleness.  (I’d say a particular English gentleness, except that Hugh Griffith is always so very Welsh).  It features some fine works of engineering, and some ingeniously concocted solutions to the problems that arise, and it has enough mild peril to keep the audience thoroughly engaged for its 80 minute duration.  It also features a physical fight between the vicar in his stream-train and Sid James on a steam-roller - surely a sight worth seeing for yourself.


Do excuse me resurrecting the Penciltonian to tell you about this small, gentle adventure.  I've seen plenty of exciting films over the last year, and have often wished to crack open the blog to tell you about them - you very nearly heard about 'Wings' (1927), a very engaging silent film that you can find on Netflix, and 'Twelve Angry Men' (1957), which lived up to its reputation.  But it's 'The Titfield Thunderbolt' that's brought me back.  It's a pleasant feature, with a very sunny optimism that seems to suit the current season.  I occasionally mean to come back and comment on another film from each decade.  I wrote up a late-sixties film many months ago and never posted it, so that may happen.

P.S. Other films featuring two or more actors from Ben-Hur include ‘Bridge on the River Kwai’ (1957, as mentioned earlier) which features Sextus and Quintus Arrius, and ‘El Cid’ (1961), which features Judah Ben-Hur and Pontius Pilate.  If you can think of any others, I’d be glad to hear from you.

P.P.S. It seems I really enjoy tales of vicars having light-hearted adventures.  See also, Father Stanley Unwin in 'The Secret Service', Reverend Charles Bentley in 'The Mundane Egg', and the kindly bishops (of Digne and Tatchester) who get involved in 'Les Miserables' and 'The Box of Delights' (the latter of which also involves a number of unscrupulous curates who fight magic with guns and flying cars).
Posted by Ben Swithen at 22:56