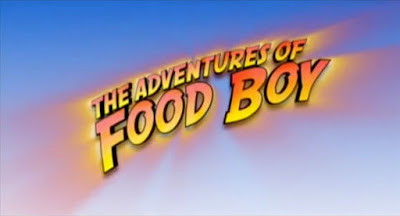 Yesterday, my bandmate Pez urged me to look out ‘The Adventures of Food Boy’ on Netflix.  I can’t remember quite why the recommendation was made, but the concept entranced me: a boy suddenly learns that his family has the magical power to produce food from their hands.  What sold me on the film was a description of a scene when, attempting to run for ‘class president’ (which is a thing, in America), young Ezra Chase (for that is his name) accidentally shoots hams out of his hands.  Hams which strike his hated rival in the face.  Hams.

I spent a few hours mulling over this concept.  The idea was intriguing: food from nothing, hams from hands.  Spontaneous food-production is a fantastic notion.  You’d never go hungry again.  Heck, you’d never need to go food-shopping again.  Assuming a £20 weekly food shop, you’d be running on a saving of a thousand pounds a year, and you’d be a position to hand similar savings to everybody around you.  Engaged by a homeless person?  Ham ‘em!  Cold, cold Winter?  There must be some flammable foods you could produce and burn.  Oatmeal, perhaps, or bread?

The prospect was incredible.  You could wring a great drama out of it.  Or would this be another ‘Bernard’s Watch’ (CITV, 1997-2005), something far more satisfying in the imagination than on the screen?  Inevitably, the reality was disappointing.  Or, it was as expected; I knew from the off, this would not be beautiful art.  A star-and-a-half rating on Netflix, and the recommendation I received yesterday was more along the lines of a damning indictment.  The luscious hams I’d imagined were not great hunks of meat, they were wafer-thin processed stuff.  Hanky-meats.

Ezra seems to find very little joy in his magical powers.  Unpredictable mustard ejection isn’t really his bag.  He has a dream, a slightly boring dream, of getting into an Ivy League university.  Do teens really get excited about that sort of thing?  Specifically, cool movie protagonists, and the sort of kid who would choose to watch a film called ‘The Adventures of Food Boy’.  Also: there are no adventures in this film.  He goes to school; he wants a career; he plays a little golf and wants to work on Wall Street.  There’s a jape, a scrape, even an antic, but no adventures.  This is no Buckaroo Banzai, no Priscilla, neither Rocky nor Bullwinkle.

How is it as a film?  Well, it’s clearly working to a tight budget.  They’ve hired a school and got a good number of extras, but there’s precious little left for the special effects.  The conjuring catering, which ought to be a visual feast, is weakly.  You can make a lot of magic with a little imagination and a good grasp of editing, as we saw in 'Orphée' (1950), but almost every apparition in this film is done the same way, with drainpipes in the sleeves.  It’s easy to guess, and it wouldn’t wow a toddler.

The movie as it appears on Netflix is in tall-screen, and seems to have been framed with this in mind - a strange rarity in the late noughties, when even made-for-TV and straight-to-video had gone widescreen.  (I have since found a widescreen version on Youtube while gathering screen-caps, but a lot of the shots seem to have been planned for 4:3).  The film is occasionally loud (with a musical score that belongs in a cooler film) and colourful - Ezra’s friends by-and-large fail to distinguish themselves, but they each have their own colour, and dress in a range of outfits around that simple theme.

The other place that colour comes to the fore is in the movie’s real highlight - the highly stylised, very low budget flashbacks to famous food-wizards like the Earl of Sandwich.  These are played out on a very small stage, perfectly fitted to the film’s aspect ratio, and with all the set details painted on flat wood or cardboard.  It’s something you rarely see outside of 20s German expressionism or The Tent Stop of ‘Playdays’ (CBBC, 1988-1995).  These strangely-acted interludes really made the film, for me.

It’s not a wonderful movie, but after the dreary opening 22 minutes (which contain no food magic, and no hints that food magic will appear) it was sufficiently engaging to keep me going for the full 90.  Despite the food theme, don’t be tempted to watch it while dining, as there are a few instances of vomiting, pseudo-vomiting, and other culinary vulgarity.


P.S. The film has a strong moral which we hear articulated several times.  I like films with morals because their existence means the world will get better and we'll all be okay.
Posted by Ben Swithen at 13:41