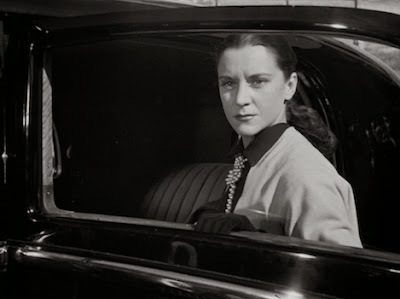 I watched this film by accident as I had in mind that it was released in 1949, a gap in my chronology, rather than 1950, in competition with 'Julius Caesar'.  In ways I cannot properly define, though, it feels more fifties than forties, so perhaps I should have guessed.  Forties films had an agreeable broadness to them, a roundness and a slightly theatrical character to their dialogue and performances, while 'Orphée' joins the fifties in enjoying a sort of realism, a sharper, harder beauty.

There was a romantic and fantastical flavour to 'Les Enfants du Paradis' (1945), for instance, and even 'Went the Day Well' (1943) had a niceness against which to offset the brutality of war.  'Orphée' is quite different, giving us an incredibly grounded world, with Orphée himself a poet of the plainest kind, an unpretentious, rather humourless fellow.  His home-life is almost kitchen-sink drama, though not so grim as that makes it sound.

And into this uncommonly believable France comes death herself.  She's utterly practical, and is as likely to be driven in as automobile as she is to enter the underworld through a mirror.  The special effects are excellent by merit of their simplicity.  Nothing is excessively fancy: the world of the dead, though dream-like, is plainly bomb-ruined France.  Death's employers are not flamboyant or demonic, but a small board-room of sober, suit-wearing bureaucrats.  The fantastical parts are as entrancingly plain and unostentatious as the domestic, and so come across as far more impressive and memorable than they might have been with fancier effects.

Since I've already covered 1950 (whoops) I'll leave my comments short.  And through further administrative bungling I've ended up with a small backlog of fifties films from consecutive years, so over the coming week you can expect Penciltonian comments on 'The African Queen' (1951), 'High Noon' (1952) and 'The Robe' (1953).  And if I can watch something for 1954, I'll have completed the decade.


P.S. Wikipedia's page on the film calls it 'Orpheus'.  It seems terribly rude to translate a character's name in the title.  I'm sure anyone with the slightest interest would be able to guess that it's the same name, and the opening minute of the film makes the link between the story we're about to see and the ancient myth quite explicit.