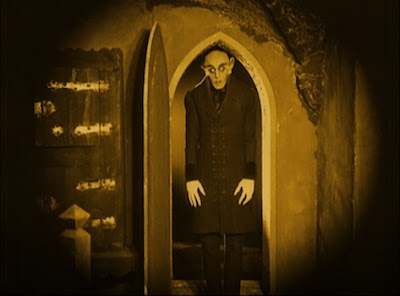 I'd been quite tempted not to watch 'Nosferatu' - after all, I'd already covered 1922 with 'Häxan', an exciting Swedish/Danish documentary on witchcraft which relieved me by being less alarming than I anticipated - and it wasn't as if The Penciltonian lacked for silent German classics.  Indeed, adding together the silent and the noisy, 'Nosferatu' is the eleventh German film I've watched for the project.  The twelfth, if you count 'Das Weisse Band' (2009) which I've entirely neglected to write up, but which I was very glad to watch.

Nonetheless, when my friend JillBob mentioned that she had a copy of this, the first vampire movie, I felt I resolved to go ahead.  After all, Werner Herzog considered it the greatest German movie, and the few clips I'd seen made it look extremely stylish and not a little horrific.  Besides, it shared a director with 'Faust' (1926) which I enjoyed so much in February.  Both are adaptations of existing tales, but while 'Faust' was an ancient legend, 'Dracula', which is here ripped off but not paid for, had only been in publication for 25 years.  This is a less ridiculous film than 'Faust', having less room for comedy interludes.  Its ending isn't quite such a cheat as that earlier film, and is told with pictures, rather than that film's odd tactic of wrapping matters up with a page full of text.

Count Orlok, the film's copyright-busting name for Dracula, is a magnificent physical specimen, with his huge hands, mouse-like mouth, his sharp ears, gigantic nose and look of constant surprise, all this on the implausibly slender body of Max Schrek.  He throws his shadow before him, and looms over our heroes, before doing the rudest and most horrid thing an obvious vampire can, buying a house just over the road from theirs.  He isn't the sexy Dracula we all know and love, but a creaking corpse, incredibly still and angular, which is style I much enjoy.  An embodiment of death.

As in 'Faust', director F. W. Murnau envisages The Black Death as the ultimate danger to society: demonic in origin, and killing indiscriminately on a vast scale.  In his earlier film a giant devil stood over the town and billowed the plague as smoke.  Here Orlok walks among us, on our streets and up our staircases, bringing his plague in soil and rats.  Doors are marked with crosses to keep out the evil, as if fending off the Angel of Death at the Passover.  It's hysterically xenophobic stuff, but rather disconcerting.

By this stage, cinema has everything it really needs, except perhaps audible dialogue.  Rich use of tinting makes up for a lack of colour photography, and Murnau realises he can use the film to show the audience, not just action and plot, but novelties they might only have read about, hence the venus fly-trap above, which does its thing and eats a fly before our watching eyes.  This sequence is even given context, as we have a brief scene with a teacher explaining the plant to his students, and for a moment we're in the same documentary territory as the aforementioned 'Häxan'.  Such diversions are permissible as Murnau cuts all the slack, removing anything that would be a waste of our time to watch.  He knows we're familiar with the clichés, so while an earlier film, or a modern amateur, might have lingered on a hero tearing up a bed-sheet, then tying each strand together to make a rope, here we cut from the first brief rip to the descending hero.

And a fine hero he is too.  Gustav von Wangenheim plays Thomas Hutter (Jonathan Harker in all but name) in a manner very similar to Gustav Fröhlich's Freder in 'Metropolis' (1927) - indeed, it's a certain type of silent hero who crops up in several of these films: simple, energetic, good humoured sorts who find delight in the simple things of life, who are then plunged into dark realms, their happy lives marred by catastrophe.  Uncomplicated characters, but very well played, coming across as immediately likeable, rather than simpering or irritating.

Alas, I believe I've now watched all the silent German films that I've heard of, and may need to fill the remaining gaps in the 20s (21, 23 and 29) with Westerns or some-such.  Up until World War II, Europe seems to have been producing far more attractive, cool and exciting cinema than America, so if you've any suggestions from one continent or the other (indeed, any continent at all) for these early years I'd be glad to hear it.