The Fez of Etymology (and other stories) 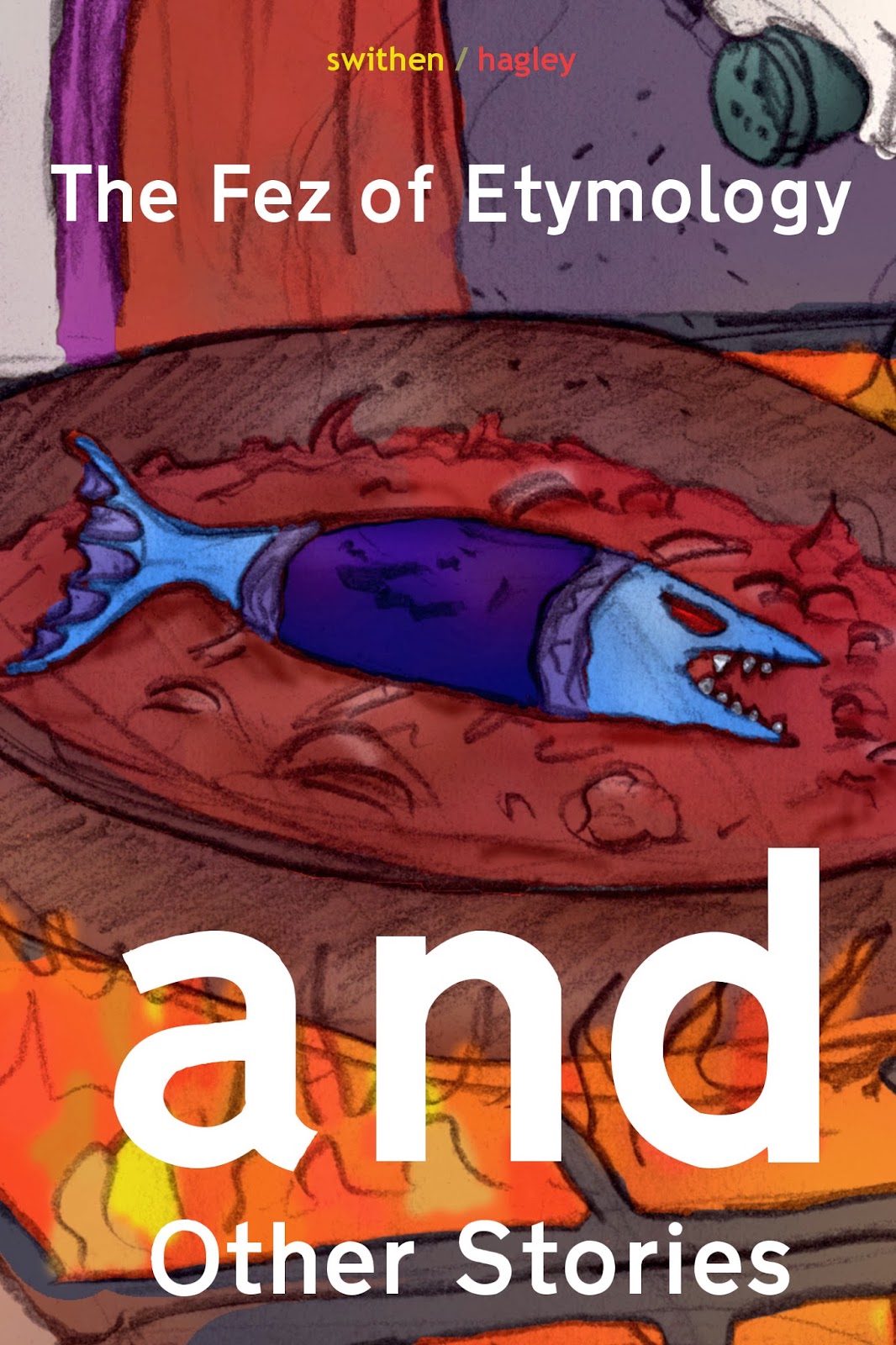 Dear readers, my 2013 was not wholly devoted to the viewing of old films, nor was my writing restricted to the comments made on this blog.  With Tom Hagley, I worked on some fiction of my own - or perhaps that's poorly phrased.  Crucially, an assortment of short stories came together.  An anthology.  An E-BOOK!

What are its attributes?  It's short, it's exciting, and it's full of ghosts and talking animals and forgotten former prime-ministers.  International adventure, historical catastrophe, Old Testament fan-fiction, that sort of thing.  Most of all, it's dirt-cheap.  Much as I'd like to regurgitate the blurb, and sell the thing to you, this blog was never about adverts, it's about stories and history and where things come from.  Instead, let's ask: who were the Fez of Etymology?

Let's flash back a moment.  Eleven years ago, Tom and I went to university in a tiny pocket called Bretton Hall, situated in the middle of the Yorkshire Sculpture Park.  Between our houses (Litherop and Swithen, two of the squalid blocks that clustered around the mansion) we constructed a tiny comedy troupe, named in a moment after my dictionary of etymology, and a novelty fez.  I'd had fun before university making audio-dramas, and with Tom, was keen to do so again.  We made seven-and-a-bit instalments of audio adventure, a story about a Victorian submarine going to Atlantis.  We made it up as we went along, and had rather unrealistic hopes for it.

Thankfully each episode was better than the one before it.  Livelier, more energetic, more inventive.  On reflection the opening pair had very little to recommend them, and it's unsurprising that our audience was few.  Nonetheless, when the series were played on Radio KoL, Jick, the creator of fledgeling RPG The Kingdom of Loathing, enjoyed it enough to name an in-game item after the eponymous Fez.

We, or at least I, had high hopes of prosperity and stardom.  Bretton Hall had incubated The League of Gentlemen, and their trajectory from students to radio comedians to TV comedians and (less successfully) movie stars was an alluring one.  Fame did not fall on the Fez of Etymology.  We eschewed the campus's regular open mic evenings, and never took our series to the big city (if one can so-describe Wakefield).  In our early years we performed live only three times.  Once in a bedroom, once in a wardrobe, and once on a sculpture (which was naughty of us).

We wrote a play, which was never staged, though it exceeded the merits of our audio adventure by dint of having a plan and a plot.  It was to have been called 'The Fez of Etymology presents Jules Verne's Journey to the Centre of the Earth, based on Around the World in Eighty Days by Jules Verne', and rehearsals co-starred singer-songwriter Tom Hollingworth, adult actress Masie Dee, and a giant talking goose, named Goosey.

There followed a couple more seasons of audio-drama - 'The Mundane Egg', which was really quite good, but better in the memory; and 'Darius Cantor Must Die', a huge saga which no listener could bear, which saw us abandon silly comedy for silly drama and epic fantasy.  I'm inclined to think it had true greatness under its flabby folds, but my recent attempt to novelise it proved impossible.  Its merits are lost to time.

At last, we did stage a play: 'Tamburlaine, the Lion of Persia' (Not a Real Lion)', a violent pantomime based entirely on the dramatis personae of Marlowe's Tamburlaine.  We'd never read nor seen his play, nor did we know its plot, but the list of character names fired our imagination.  Our play was either splendid or terrible, and nobody in the world could tell you which.  It was dense and fizzy and ran for two or three performances in Leeds.  I dearly hope some of the audience had come to see a sober classical tragedy; they didn't get one.

After that, Tom and I worked together on the start of many projects, but nothing held our attention.  We went our separate ways.  The best of our ideas had been an anthology of short stories, but who would publish such a thing: odd short stories by two unknowns?  This was before the world cared about ebooks.  When our tenth anniversary rolled around in 2013, I suggested we get together and make a short film.  Some lively ten-minute runaround on Youtube, possibly about Cromwell.  It became apparent that this could never happen.  We lived too far apart - or Tom did, at least.  But this was the age of the Kindle and the Kindle-analogue.  The stories could come alive again - indeed, in my mind the idea had never quite gone away.  We could self-publish - perhaps a vanity, perhaps a practical way to find one's own audience.

So here it is at last, the ultimate fruit of the Fez of Etymology.  'The Fez of Etymology and Other Stories'.  Our submarine tale is in there, or at least its skeleton, revivified and clad in curious meats.  Likewise Das Security Bathroom, which started life as a thirteen-minute Fez movie.  The other nine stories are new, for this is neither an exercise in recycling nor nostalgia.  Some of the characters hail from our audio and stage-work, most obviously Master Smith, a shard of Tom.  Characters we cared about, and ideas we didn't want to see trashed, can outlast those over-compressed mp3s.  Short stories are beautiful things: they're short, and they're stories.

Will the book prosper?  Not spectacularly, but small audiences are just as good as big audiences, and both are preferable to non-existent audiences, which is what the stories would have if the book had never been made available.  Hooray!

The book is now available from amazon.com, amazon.co.uk, amazon.ca, amazon.de, and all those regional amazons.  Readers, this ebook can be bought for yen!