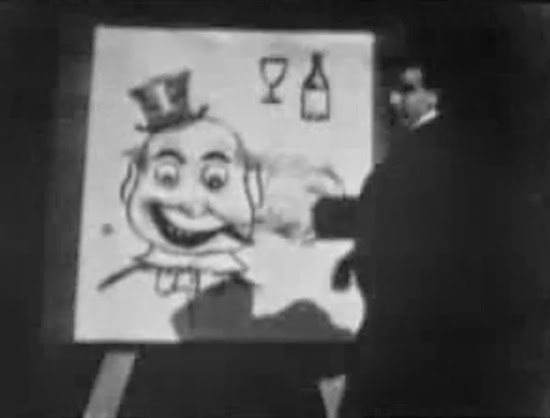 A film for each year from 1913 onwards!  It seemed a good, clear concept when I began the project, but now that 1913 is no longer exactly a century ago, it seems a rather arbitrary start-point.  Shall we go a little earlier?

I’ve been aware of ‘The Enchanted Drawing’ for most of my life, as it garners a mention in ’The Rudiments of Wisdom’ by Tim Hunkin, an excellent book of illustrated facts that probably accounts for a very large part of my education.  The film combines live action and animation (though not in quite the way Hunkin remembers), as an artist is seen sketching, then plucking his illustrations from the paper, like Smarty Arty in ‘ZZZap!’ (1993-98).  He draws some wine, then picks it up from his drawing and drinks it, somewhat to the chagrin of the face he has rendered.  He cheers the face immeasurably by granting it a hat and a cigar.

It’s a short, satisfying film, augmenting J. Stuart Blackton’s pre-existing live performance piece with the cinematic innovation known as the stop trick, or locking off (stopping the camera, adding or removing elements, and starting the camera again, making the elements appear or disappear as if by magic).  These days we all know exactly how it's pulled off and have the resources to do so ourselves, but this remains a very lively and effective example of it, with a pleasing sense of humour behind it.  You can watch it here, and marvel at such a thing being produced during the reign of Victoria. 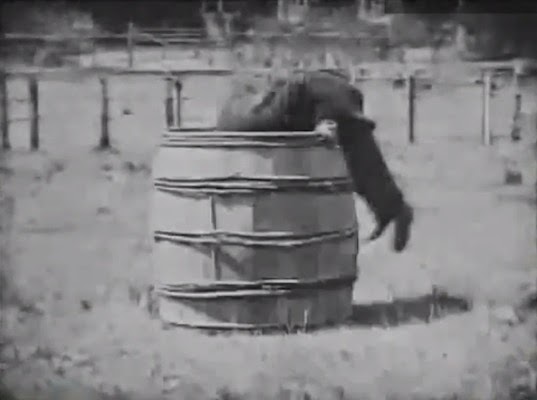 The first chase movie!  The film is short, and the plot simple: a vagabond steals some meat from a butcher, and is pursued by dogs.  He hides in a barrel, but they join him there, and eat the meat.  The man is then caught and belaboured about the head.  For its time it was pretty technically impressive, joining together a variety of consecutive shots to show the man’s route - though this very soon became the standard, and within a couple of years a film so simple would seem crude and obvious.

The film is enjoyably silly, but ends with more violent aggression than the crime, or the genre, seem to merit.  It's the earliest British film I've looked at, and you can watch it here, though I wouldn't really encourage you to do so. 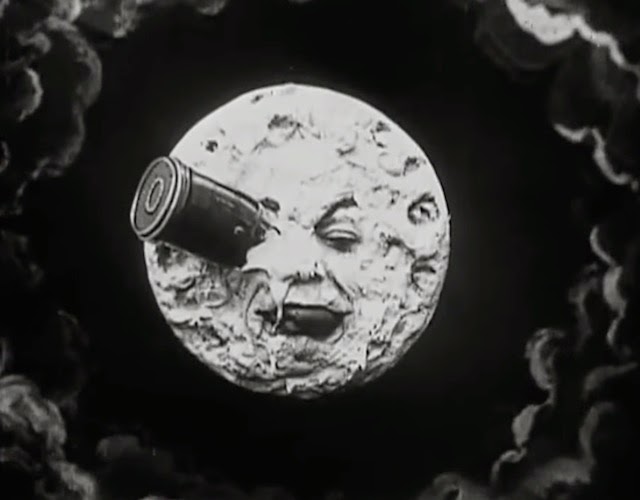 Georges Méliès was an amazingly dedicated early director, building his own film camera, and making several hundred films between 1896 and 1913.  He was also a stage-magician, with all the ingenuity for trickery that comes with such an occupation.  He invented the aforementioned stop-trick, and makes thorough use of it here.

This is the source of that famous image of the moon with a rocket in its eye, though that shot makes up only a fraction of the wonders on display.  We follow a court of elderly wizards, or perhaps just wise old men who dress for a holiday, and climb into a capsule which is fired into space, where they witness several astounding phenomena, and tussle with exploding moon-men.  It's beautifully stylised, and feels like 'Mary Poppins' (1964) in ways that I can't quite pin down.

After the wizards' rocket arrives in the moon's angular marshlands, I worried about how they would take of again, since they lacked the telescoping launch contraption seen on Earth.  Clearly, I hadn’t grasped the charming naïveté of the science at play: the film seems to assume that all gravity comes from Earth, meaning one can land on the top of the moon, but make your return voyage by pushing the rocket off a cliff, and falling back to Earth.

It's certainly the best of the films I've watched for this entry.  At this point in history, Georges Méliès was the most exciting director on the planet, and it was quite a while before anybody caught up with his witty and surprising visuals, and genuinely attractive designs.  I can't think why you wouldn't look the film up on Youtube. 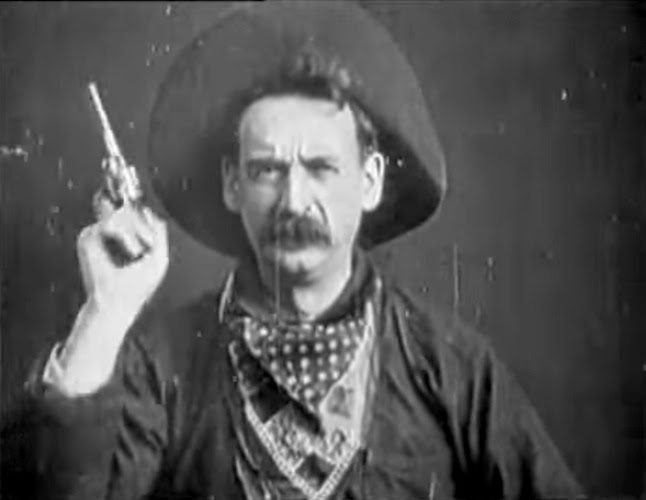 I’ve already written about a film from 1903, ‘La Vie et Passion de Jesus Christ’, which was in colour - albeit of the crudest sort - was most of an hour long, and was filled with special effects.  Given how rarely 1900s movies are spoken of, and how crude and terrible films from later decades could often be, I was astounded to find such technical and artistic competence so early in the history of cinema.

Edwin S. Porter’s ‘The Great Train Robbery’, at a more modest twelve minutes, shares some of its ambition, using techniques of compositing and back-projection to bring trains into the studio.  It also features a fist-fight on a moving train - something I’d been impressed by in ‘Dr Nicholas og den Blaa Diamant’ a decade later in 1913.

The film is the more urgent of the two 1903 works, and (unusually for so early a film) never holds its shots too long.  It has two highlights: the first comes around the five minute mark, when Broncho Billy Anderson plays a man who is shot trying to escape the bandits.  The flailing death he gives us is wonderful to behold.  The second is the final shot, the film’s only close-up, in which Justus D. Barnes pulls out a gun, aims it at the camera, and so at the audience, and fires.  The End!  Watch it here, if you dare. 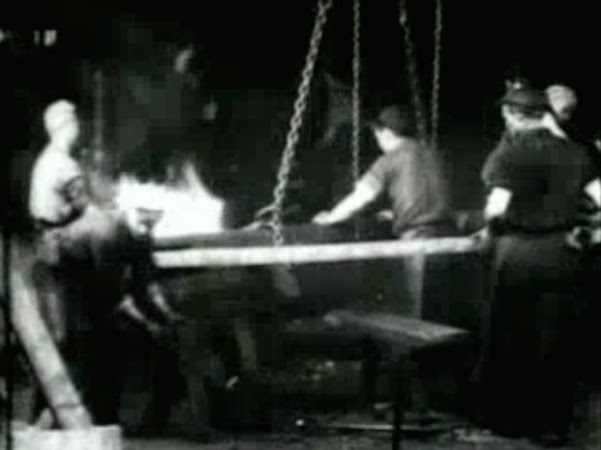 I was disappointed not to be able to source any fiction films for 1904, indeed, the only footage I could find from that year was ‘Welding the Big Ring’.  I dwell in Sheffield, so feel obliged to take some interest in the history of industrial metalcrafting, which may have made the piece a touch more approachable.

At first it seems like nothing will happen.  Muscle-men stand with an urgent sort of attention, surveying a huge metal ring.  Suddenly, it’s all go.  The ring is pulled out of the flames and the men descend on it with long-handled hammers.  The thing’s obviously red-hot, but they leap on it, attacking with a rhythm that makes them seem mechanical.  The work looks perilous, but the men have no fear.  They’re machines!  The ring, I assume, was later handed over to Sauron.

It was a little uninspiring, after the works of ingenuity and excitement further up the page.  It presents real working men, rather than schlock or frippery, which is commendable, but isn't what I tend to look for in a motion picture.  In the future, documentary footage tends to be coupled with innovative editing as in 'Man with a Movie Camera' (1929).  But these were early days, and no amount of perilous hammering can make 6 minutes of static footage hold the attention.  You can watch it here, but I'd stick with the first two minutes.  Your time is precious, dear reader.


P.S. I'm particularly delighted to add 'Stop Thief!' (1902) to the Penciltonian roster, as it joins 'Shaft's Big Score!' (1972) in that most unusual sub-genre, films with exclamation marks in their titles.
Posted by Ben Swithen at 23:44