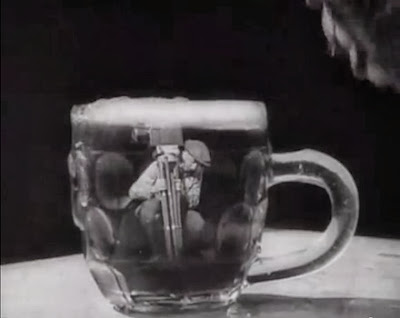 Occasionally, recently, I've grown weary of The Penciltonian, of having to watch a pair of films a week (as enjoyable as this is) matched to the years I haven't yet covered, then write them up.  Some days I look eagerly to December, when I can count it as a complete work, and update it only when I have a great urge, or a fine and unlikely film to speak about.

Sometimes, though, I find a film like this one, 'Человек с киноаппаратом', and the project seems worthwhile.  The whole scheme, and its attached blog, started so that I could find such amazing works as this, that I might watch films I would otherwise miss entirely - and this find has excited me more than any.

Chairs!  Trams!  A typewriter!  A telephone!  An I-don't-know-what!  The crowds swarm, the movie theatre warms up, the band begins to play.  The film is a torrent of images, tiny clips of life, and of objects in the Russia of the late 1920s.  It's a documentary, I suppose.  A silent film with no intertitles, no story and no characters.  Factories, engineering, trams and fast trains.  Horses and parasols.  The occasional car.  We even see a birth.

I had thought silent movies had peaked a couple of years earlier with 'Metropolis' (1927), when they'd grown as big and confident as they could.  1929 is down in my mind as the year talkies became the standard, with 'Hallelujah' and 'Sunny Side Up' and the Marx Brothers - but I didn't know about this film, which does pictures without sound - and without any commentary - so well, so intimately, giving us all the scale of the city without the need for sets, and with real people passing by as themselves, not silent crowds responding melodramatically to catastrophe.

Director Dziga Vertov had no interest in fiction, and thought the cinema had far more important matters to attend to.  Spurred on by a desire for authenticity, and with (in apparent contradiction to this) a rich imagination for special effects, Vertov filmed some of everything, and together with his wife Elizaveta crafted an absurdly fast montage, a picture of three cities in what is now the Ukraine.

A dying man in an ambulance, a sequence of the ambulance driving right across the screen cut together with fire-engines going left - or rather each holding steady, as the emergency vans are shot from parallel vehicles.  Weeping, sorting, mending.  A shampoo and a shave, intercut with the sharpening of an axe.  Russia looks warmer than I'd imagined.  Not comfortable, but full of life.

It's the sort of film Peter Greenaway might have put together in the silent age.  Like this, his early films eschewed characters and actors on the screen, but they justified their sets of pictures with narrators telling stories tenuously connected to the real, visual story.  This film doesn't have that opportunity, so uses music, with various different scores having been attached to different releases over the years.  The version I watched uses Greenaway-collaborator Michael Nyman, probably my favourite movie composer, with his obsessive rhythms, his minimal, urgent chords, deployed excellently here to support the astounding pace of the film.  It's just the sound I like.

Suddenly in the middle of the film the flow ceases.  We're given, not a moving image, but a still shot, a single frame repeated.  We cut to a lady, Elizaveta Svilova, trimming the film-strip with scissors.  A moment later, the frames she's been looking at, frozen shots of blurred action, come to life, and what we know as only a set of frames is played for us as motion.  What an excellent education this film is, teaching us that films are films, that what we see is not just the truth, or the way things really look, or the natural way to tell the story in images, but a deliberately constructed piece of work, something that has been crafted and engineered, over which decisions have been made by cameraman and editor.  I'm extremely taken with this movie, as you may note.

This isn't anyone's story but the director's.  This is the tale of how Dziga Vertov walked around with a camera and gathered footage.  It wants us to remember that there's a camera on the set as well, and that everything is for our benefit, like in 'Ladies and Gentlemen, Mr Leonard Cohen' (1965), when Cohen assures the audience that we haven't seen him acting naturally; caveat emptor.  The film sparkles with Vertov's amazing ingenuity and humour, reversing footage, bolstering a magician's act with trick photography, and giving us, through the wonder of stop-motion, a dancing lobster, a tripod that puts itself away and a camera that can take a bow.  The fun for the audience, then as now, is working out how it's been done.

What great shooting!  What great editing!  And after all these years, what great music, confirming and emphasising the excellent energy and drive of the pictures, an energy that exceeds anything else I've seen this year.  Few films have better captured and held my attention.

Available on DVD, and also available on YouTube.  I think this is an amazing film, and would urge you to watch it.  It'll only take an hour.