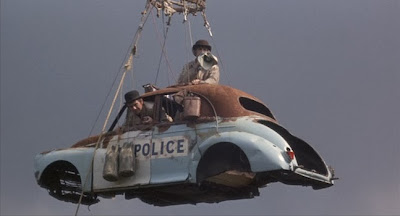 A bizarre post-apocalyptic comedy, directed by Richard Lester (he of the Beatles films), with a script co-written by Spike Milligan and a cast that includes many of the comedy greats of the era.  Much of it is extremely silly, and some of it is even stupid, and as a whole it's an utterly bleak picture about the futility of Britishness after the atomic catastrophe.

It's a film adaptation of Milligan and John Antrobus's absurdist play of the same name.  Jaunty music and surreal jokes played out on Britain's filthiest, ugliest and most polluted landscapes, the most depressing places in the country, fields of shattered crockery, hills of abandoned shoes, every floor littered with something.  It's bleak and ridiculous, and the director apparently worried that he'd spent so much time making it look miserable that he'd forgotten to make it funny.  I'm not sure how well he succeeded, but I enjoy it very much.  It thrills me and it distresses me.  It just about matches 'Daisies' (1966) for oddness, which is quite an achievement.

My favourite scene of the nineteen-sixties is in this film, when Mother (Mona Washbourne) is visited by a nurse who hands over her death certificate and informs her that she's died.  Mrs Throper is overwhelmed with a deep, gentle sadness when she's allowed to hold all her certificates at once: birth, marriage, death and school.  She later gets to throw plates and bottles at Harry Secombe, and becomes a cupboard.

An excellent cast, including Arthur Lowe, Peter Cook, Roy Kinnear and Marty Feldman, manages to deliver the bizarre, almost nonsensical dialogue with a warmth, and make bizarre individuals into people.  Nobody here has realised they're in a tragedy.  The expectation of imminent thermonuclear war must have been a very terrible thing back then, and I don't imagine this film offered much in the way of consolation.

This was the first release in the BFI Flipside range, excellent but neglected British films.