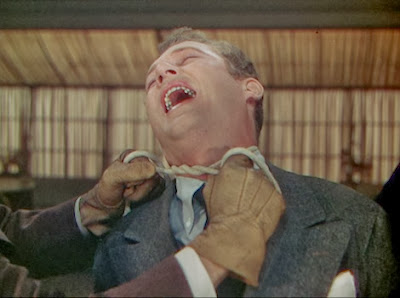 Look, the forties have been going wonderfully well - 'The Third Man' (1949) for goodness' sake, and 'Les Enfants du Paradis' (1945) - and I've enjoyed the decade so much, more consistently than any of the others, indeed - that I didn't want to spoil things now.  1948 was the sole empty year of the forties (heck, the only unfilled year between 1940 and 1996, at the time of writing), and I didn't want to ruin the decade with something poor, or even something promising but mediocre.  So I chose Hitchcock's 'Rope', because I know it to be good.

Now, that isn't a problem in itself, many of the films I've watched I've known and loved and chosen for their familiar merits - but this won't be the only Jimmy-Stewart-Hitchcock-thriller-set-in-a-single-room that I've seen for The Penciltonian, though this and 'Rear Window' (1954) have very little else in common.  So do pardon me cherry-picking this film to fill the gap.  Such an indulgence seems permissible as a reward of sorts, since I'm down to the last five empty years.

Like many of the best films, 'Rope' is experimental enough to be interesting, but conventional enough to be watchable (or should those be the other way around).  The great novelty, of course, is that the whole film (after an establishing shot) is told in a single, unbroken shot, with the camera roaming to show us details, rather than the convention of various angles edited together.  It's a tactic used far more lavishly - ridiculously so - in 'Russian Ark' (2002), which is told from the point-of-view of an unseen central character, whereas here the camera stands only for the audience.  We're the ones watching this murder story.

When I first saw it about a decade ago, I was surprised by a couple of things that now seem utterly unsurprising.  First, it was made in 1948 - and the only Hitchcock I knew back then was 'Psycho', from 1960.  I was surprised, as the two years seemed incredibly distant one from another (though, as a mathematician would tell you, they're only twelve years apart).  1960 is very nearly the modern day, or so I thought, but the forties were practically Victorian.  I'd hitherto thought of Hitchcock's career as a tiny, intense thing, all occurring in a short blurt the length of a decade, like the Beatles albums.  It was the first time I started to tie films to their years, a process which led, eventually, to The Penciltonian.

The second thing that struck me was that it was that it was in colour.  Perhaps I had a notion that the world didn't go into colour until 'Doctor Who' did in 1970, or in the sixties at the earliest.  I'm closer to the truth now: after some odd experiments, colour happened in a big way in 1939, but was so expensive that the onset of war made it disappear again, except for the most spectacular pictures.  Colour was on and off for a while, and only became the standard about fifty years ago.  I suspect it was affordable in 'Rope' because of the relatively low budget - the film is a play, on one set, and without many fancy effects - and because, by the nature of the movie, I suspect relatively little film-stock was needed: the shots were few, and thoroughly rehearsed, and there were no alternative angles to worry about.

It is, as I say, a very fine film, and one which has aged well - there's the merit of a filmed play.  It regards two young men who, as the camera starts to roll, have just strangled their friend, purely because they could.  We see the remainder of their evening, as they throw a polite party, with the corpse's hiding place as a serving-table.  At any point it seems they could be discovered, or else give themselves away.  To an extent they seem to want to be discovered, and praised for their daring.  It's extremely tense, highly dramatic, but at the same time witty and very fun.  James Stewart is always worth watching, and all parts are enjoyably brought to life, except David, of course, who is dead to begin with.