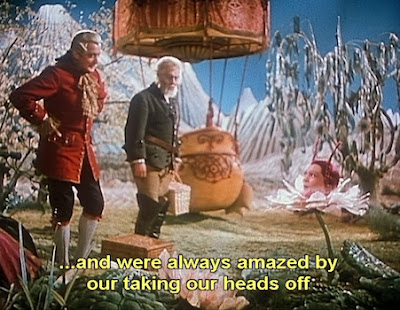 I've seen films made during wartime from Britain, America and France, so I was very keen to find one from Germany.  I'm aware there were other countries involved in World War II, but these are the four we see in 'The Longest Day' (1962), which seems a fair criterion for The Penciltonian.  'Münchausen' is a lavish comedy made by order of Joseph Goebbels, to prove that Nazi Germany could rival anything Hollywood could produce.

The film tells the story of Baron Hieronymous von Münchausen, the famous teller of tall tales (or as he's presented here, man of bizarre adventures).  He rides on a cannonball, wins the love of the Empress of Russia, and travels to the moon, where he learns that time works quite differently to how it does on Earth.  It's a story that suits the colour and ambition on display here, and the inventive film-craft available in the country that produced 'Metropolis' (1927).  It's a lavish tale, intended to rival 'The Wizard of Oz' and 'Gone With the Wind' (both 1939) for splendour, so accordingly the movie is full of the most astounding hats, costumes and model shots.


At first it seems we're watching the Baron in the 18th Century, but we soon learn that an apparent descendant of his is holding a costume ball, so the old-fashioned costume and music give way to automobiles and electricity, and what seems to be a black character played by a white actor turns out to be a white character whose make-up comes off easily.  There's a pleasing artificiality to the film, right from the start, which excuses some of the fantastical stylisation of the rest of the film.  The modern day Münchausen tells the story of the famous Baron, and we flash back to all manner of unlikely adventures.

The body of the film is full of the bizarre antics and prop comedy I'd expect from 'The Goodies': a wardrobe of clothes get rabies and attack our hero, a bugle is too cold to sound a note but once it warms up indoors it plays incessantly until stamped to pieces, and a giant pastry is opened to reveal a dwarf playing a tiny harpsicord.  It's a very silly film, but it's more fun than funny.

Hans Albers plays Baron Münchausen, and gives his best performances in quiet close-ups rather than the wild action sequences.  I'm inclined to think he's a bit too old for the role: this is a character who wishes for, and gets, the gift of ageless immortality for as long as he wants it.  He looks about sixty, so seemingly has eternal youth without the youth.  It's like watching the latter half of the Roger Moore era of James Bond, with a hero running around and seducing women a fraction of his age.  Münchausen even meets an aged Giacomo Casanova, the implication being that Casanova has grown too old to be chasing women, while the Baron has retained his mojo.  The women grow older while Münchausen stays the same, and one is forced by her family to join a convent, a fate from which the heroic Baron notably doesn't save her.

It's an lively and watchable film, but doesn't quite live up to the movies it seeks to trump.  It gets more interesting as it goes on, with a memorable trip to the moon where a babies grow on trees, and people's heads galavant without bodies, and fashions are just amazing.  There, Münchausen's trusty servant ages to death over the course of a few days, and the film suddenly seems less ridiculous, and really rather sad.  "The moon is a rather exhausting star," as the Baron notes.  It this film, death (in males, at least) seems to be something that should be chosen.  Dying suddenly in the heat of battle seems acceptable, but choosing mortality seems to be the ideal.  Since the film was ordered into existence by the minister for propaganda, I wonder how close that was to the dominant philosophies of forties Germany.

I'm glad to have sought this film out, as, though I've watched a great many German films for this Penciltonian project, there was a large gap between the early films of the twenties and thirties, and the later ones from the eighties onwards.  My knowledge of the nation's output seemed to disappear with the rise of Nazism, and wasn't restored until decades of apparently awkward post-war Heimatfilm had gone by.  Perhaps that was for the best, in terms of quality: I've been watching films from the best eras of German cinema.