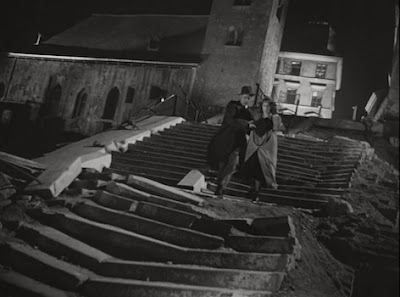 A few weeks ago I saw a very enjoyable amateur production of 'Travels with my Aunt', enjoyable because of the story: at every point I wanted to know what happened next.  Certain revelations were easy to predict, but I couldn't guess where they would lead the characters, and whenever I thought I had my head around it some complication would throw the plot in unexpected directions, and make the resolutions I expected far further away.  It wasn't just easy schlock, it was a morally complex and clever work of plotting.  Since the details, the characters and their dialogue were likewise very appealing to me, I praised Graham Green, who had penned the original novel, and resolved to re-watch 'The Third Man', as he wrote both the novel and the screenplay.

It's a British film about an American in Vienna, at a time when it was a divided and international city, a bureaucratic tangle, filled with crime, trouble and outlandish camera-angles.  It's an excellent noir, and I very much like noir, so long as it's excellent.

My first viewing of the film was immensely satisfying, trying to work out the central mystery of the eponymous Third Man.  Subsequent viewings have been no less enjoyable, regarding the performances, the lighting and cinematography and the ingenuity of the story.

I feel a little guilty that I only have positive things to say about the film - I could probably be of far more interest if I condemned it, but it pleases me too much - a beautiful thriller with a great plot - it resists sentimentality and the temptation to grant a comfortable ending.  As it transpires, I've really enjoyed all the films I've watched from the 1940s (except the German ones, oddly enough, despite loving Weimar Republic cinema).  The great surprise of The Penciltonian is that this has turned out to be the best decade for films.  'Went The Day Well' (1942), 'Double Indemnity' (1944), 'Les Enfants du Paradis' (1945), all amazed me.  Of course, I haven't looked at 1948 yet, so perhaps it will al go wrong from here.

The film, if you'd care to watch it from some optical media. And you might like 'Third Man', a song by The Duckworth Lewis Method. They're very good, you know.