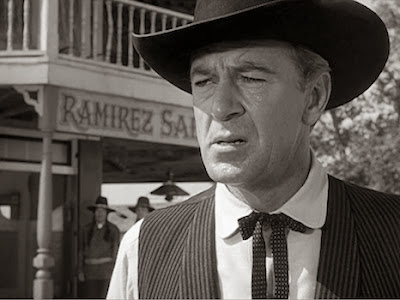 I don't like Westerns very much.  There are so many of them, and they play incessantly on television in front of old people who live without aspirations or energy.  The overwhelming quantity means there are plenty of poor ones - not badly made as such, but tediously efficient, competent, formulaic and uninspired.  The aesthetic doesn't appeal (though I like the hats), and neither does casual violence against indigenous Americans, so if I need to watch a film set in the age of the Wild West (about 1865-1895), I'd generally rather it was set in Khartoum or Transvaal, to avoid such well-worn cliches and over-familiar pictures.

There are a few notable exceptions.  A friend showed me Sergio Leone's Dollars Trilogy, which starts slowly and dustily, but ends with the breathtaking 'The Good, the Bad and the Ugly' (1966) which I embraced despite its genre and count as a favourite film, and I likewise find delight in 'Back to the Future Part III' (1990) and in 'Living in Harmony', the unexpected Western episode of 'The Prisoner' (1967), though the first of these three is quite unlike the genre as it stood, and the other two subvert it to make unusual points as parts of bigger plots.

It was put to me, though, that I oughtn't to avoid the Western; I'm aiming to see a good range of 20th Century movies in this Penciltonian project and the Western is one of the most significant genres of American cinema.  I'd watched 'Laurel and Hardy Way Out West' for 1937, but it was even more out-there than the films listed above, since it lacks gunfights of any kind.  So, I resolved to watch 'High Noon', having had it recommended by accident by an unseen stranger.  In short, a man sitting behind me in the theatre was recommending it to his daughter, telling her it was beautifully shot, was told in real time, and stood over and above the rest of its genre.  I'm more than happy with a second-hand recommendation, so watched the film at Noon-ish on a Sunday, the traditional week-day for Western-viewing, and the day on which the film is set.

To my surprise, the film turned out to be a really good drama, with well-written, well-played characters and an interesting story, which I later learnt was a metaphor for Hollywood blacklisting.  The film wasn't just a set of hollow cliches - it was genuinely atmospheric, crisply shot in handsome greys, and without the simplistic morality I've tended to associate with fifties Westerns.  Crucially, it didn't have John Wayne in it, an actor who stands for all I dislike in the genre (and who, as keen McCarthyist, vocally opposed this film, deriding it as un-American).

The story regards Will Kane, a town marshall retiring on his wedding day, who finds he has to take up his old job for just ninety minutes more to face off against a threat to the town and (since he hasn't fled) to him in particular.  The people he's long protected tell him to escape the town, but he refuses to run from his obligations.  He has an hour to round up a posse of allies before the unavoidable showdown, but nobody will give him the support he needs.  Will is the just about the only person in the town with a social conscience, and for that reason the townsfolk are ready to let him go to his death.  It's like the parable of the Good Samaritan, without the Samaritan.