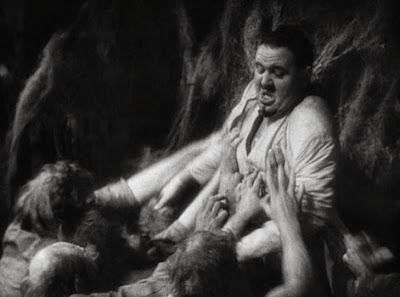 At the start of the thirties, with the arrival of audible dialogue, films seem suddenly more basic, less ambitious and altogether less impressive - or at least, the English-language ones do.  Fritz Lang somehow got away with the transition, making his talking pictures more grounded than his silents, but no less exciting.  But then, he was one of the best silent directors, so naturally he still had talent and a sharp mind in the age of the talkies.

This, though, is an American film at a time when that didn't portend slickness or coolness.  Not that it's a bad film, it simply doesn't inspire in the same way as those hectic twenties.  It's an early horror film, but less horrific than 'Nosferatu' a decade earlier, its moral less memorable than that of 'Häxan' (1922), for instance.

So what is there to recommend the film?  Well, there are scenes on ships and in the sea, things one couldn't see on stage (which is surely the major rival to the talking pictures).  Everybody speaks clearly, and the set-up for the story is interesting and memorable, the story itself being H.G. Wells' 'The Island of Dr Moreau'.

Moreau joins Doctors Mabuse, Caligari and Nicholson in being a wretched villain with a twisted mind (doctors in the films I've been watching are, it seems, wholly malign until 1965 gave us the double-whammy of Who and Zhivago), but at least Dr Moreau is only tampering with nature, operating on animals to turn them into humans (which makes less sense the more you think about it), rather than murdering, hypnotising, stealing diamonds or working as a psychiatrist.  His beasts have exciting prosthetic heads, the hairiest of which is Béla Lugosi (the first screen Dracula, an actor now best known as a historical figure, as played by Martin Landau in Tim Burton's 1994 biopic 'Ed Wood').  The beasts are all male, except The Panther Woman, who is far less exciting than one might expect from her name, and who doesn't have fancy prosthetics or make-up at all.  Perhaps she's there to titillate the audience, but this would surely be more novel, less boring, if she had a head like Lugosi's all-over beard.  Or am I expecting the wrong things from actresses?


There's a human drama played out amidst this tale of monstrous science, but within a few days I've forgotten all its details.  I suspect it, and the moral dimension, had a greater depth and emphasis in the original novel - the film is all about spectacle.  Still, it's short and it isn't dull, but it doesn't delight me.