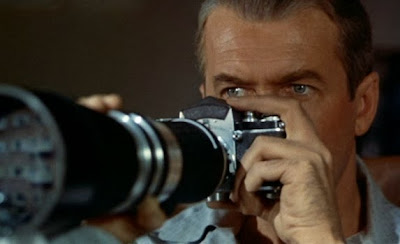 For years I assumed this film's title would refer to the rear window of a car, and that we'd be treated to a paranoid driver obsessively checking his rear-view mirror.  It is, in fact, about a housebound Jimmy Stewart, who gets his kicks as an imaginative voyeur.  He's a globe-trotting photographer, but he's been stuck at home for the past seven weeks with his leg in a cast, so he's taken to watching the goings-on in the housing block opposite.

Most of what he sees through his neighbours' windows are romances, either requited or one-sided, giving us, in a series of brick-framed silent films, Hitchcock's 'Love Actually'.  In one window, though, our inquisitive hero believes he has seen clues to something far more sinister: either he's found evidence of an uncommonly calm murderer, or else he's just being paranoid.  Of course, characters in Hitchcock movies are always told they're being paranoid.  It's part of what makes the films so tense.

The film alternates between James Stewart watching other people's stories, and getting on with his own tale of romance with Grace Kelly, before the two strands finally come together in the movie's thrilling climax.  It's a slow build, with a blend of strangers' stories and a good deal of humour.  It's a simple concept, and excellently visual.  A great deal of it is told in P.O.V. shots down binoculars or through Stewart's camera, meaning that for once the most alarming thing that could possibly happen, and which inevitably will, is if the apparent murderer looks at the camera and sees the audience.

Through no particular planning I've managed to watch three of Grace Kelly's films this month - 'High Noon' (1952), 'Rear Window' (1954) and 'High Society' (1956), and for some reason all three films show her in a romance with a man a generation her senior.  She's excellent here as James Stewart's equal and opposite.  He's a traveller at heart, but is encumbered by his broken leg and must spend the film looking and thinking, while she's more inclined to home comforts, but has to take all the action in the film, venturing into danger, and travelling into the places Stewart has often seen but never visited.

I'd seen the film once before, but was unprepared for how enjoyable it was to watch, how immediately likeable the characters were and how much comedy Hitchcock used to include in his alarming tales of violent crime.  For the severalth time during this Penciltonian project, I'm reminded to learn that famous directors can make really good films.