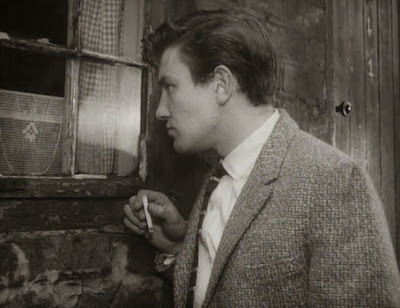 I've a friend and co-writer who occasionally claims that all British films fall into two narrow categories, Richard Curtis London rom-coms, and grim, gritty tales of the bleak North.  It's a limited viewpoint, which forgets Peter Greenaway, Richard Lester and the Bond films, but 'Saturday Night and Sunday Morning' fits very neatly into the latter category.  Factories, cigarettes, back-alley abortion, beer and austerity, with an aggressive, adulterous worker as its cocky protagonist.  All it's missing is mass unemployment, though that hadn't really been invented yet.

My 1960 film was meant to be 'Psycho', if only to show a massive contrast in style and scale with the previous year's 'Ben-Hur', but it struck me that American cinema was overbalancing my project, while Britain, my nation of preference, was getting a little neglected.  So here's England, the industrial North, and young Albert Finney, before he was a Sir.

A few weeks ago I described 'Orphée' (1950), probably erroneously, as being grounded in kitchen sink drama.  This, though, is the real kitchen sink, with life's small highlights embedded in a world of work and tedium, in which nothing is extraordinary and there is no lasting excitement.  It's a grim view, and one that doesn't particularly appeal to me in films.  In some ways it's too real, insufficiently fanciful, as the film's events probably played out in much the same way all over Britain in real life.  I'm always glad to see the cold truth in a film, but I prefer to see it told with more imagination.

In other places I've praised 'Die Zweite Heimat' (1993), the events of which likewise begin in the austere, 50s-tinged world of 1960, and I've often described that as being more like life than like a film - but it has an epic quality, taking in the whole decade over two-dozen hours, and bears some suggestion of romance, art and progress.  'Die Zweite Heimat', or its forebear 'Heimat' (1984) could easily take an hour or so to look at bleak, inescapable cycles in the manner we see here, but would do so as part of a larger, more interesting story.  By the same author as 'Saturday Night and Sunday Morning', Alan Sillitoe, I prefer 'The Loneliness of the Long Distance Runner' (1962), which captures the same mood, but is generous enough to provide a likeable protagonist and the element of surprise.