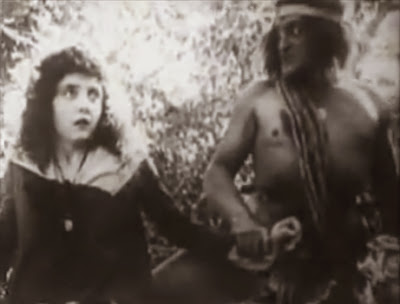 A mere four years after the novel saw publication, here comes 'Tarzan of the Apes'.  It opens with a zoologically dazzling opening montage to match that of 'Life of Pi' (2012) - A snake!  A warthog!  A lion!  An elephant!  Some kind of bear!  Double rhinoceros!  I suppose audiences back then might have been more easily impressed by such stock footage displays as the one that starts this picture.  (That is, if it is stock footage - it could have been shot for the purpose for all I know, but lions really don't live in jungles, and the scenes with actors were apparently shot far from these animals' real haunts, in Louisiana).  Still, it must have been exciting to go to the cinema and see, not just bleary human forms and shuffling slides of text, but vast, shaky animals.  It's the same reason we see a venus fly-trap in action in 'Nosferatu' (1922), or animals in full colour in 'The African Queen' (1951)

As we all know, Tarzan is a hairy but clean-shaven fellow who lives in the jungle, swings on vines (he does so only briefly here, at the half-way point of the film - I suspect the famous image comes from a later picture) and was raised by animals, making his eventual meeting with civilised society (as opposed to sinister-looking Arab slave-traders, local savages and other horrid stereotypes) exciting and slightly-but-not-very romantic.  The concept is a little similar to that of The Jungle Book, except that, while Mowgli was (I think) an Indian child raised by a wolf, a panther and a hilarious bear, young Tarzan is an English child of the upper class raised by apes and heir to a fortune and heritage of which he knows nothing, meaning a (financially) happy ending is practically guaranteed from the start (though as we'll see, this film never quite reaches that inevitable 'you were rich all along' conclusion).

So, for the first half, young Tarzan is raised by a lovely chimp called Kala, larks about a while, and has no reason to talk to anybody - convenient in a silent film.  The intertitles mainly tell us what is happening or what characters are thinking, which seems a rather poor use of silent film as a visual storytelling medium.  This feels less like a film, more like a written story with moving illustrations - illustrations which are as spectacular as they are expensively staged: slightly.  As in 'America 3000' (1986) and 'Battlefield Earth' (2000) , our hero learns English and ingenuity after discovering a book, and immediately comprehending its uses and the meaning of its symbols.

After this we skip a number of years, and meet the adult Tarzan, played by Elmo Lincoln, an actor with an amazing name.  He engages in a variety of adventures of exactly the kind one might expect of Tarzan, and left me wishing I was watching the less innovative but much more fun 'George of the Jungle' (1997).  This, though, was almost certainly the first time there had been a film quite like this, so I suspect I ought to have admired its novelty - but I've seen it all done more enjoyably and slickly later on, so these fresh adventures seem, with the weight of time, full of cliché.

The film only covers the first half of the novel's story.  I'd be tempted (though to be honest not very tempted) to watch the sequel which was released the same year (and was a Western, curiously enough) but it no longer exists anywhere in the world, and can be watched by nobody.

The film suffers, as many 1910s films do, from lack of close-ups of actors' faces, meaning that even if they're doing their best acting we don't really see the emotion, so it's very hard to engage with it as a drama.  By this point these things were getting better, and film-making was growing steadily more competent, so I suspect the rather rough and bleary print I saw on Youtube has also counted against my appreciation of this film.  That is, the early 20s films I've seen restored for home release have looked and sounded so crisp and beautiful, and my dismay at the 1910s may in part stem from the fact that I've watched the whole decade for free in gloriously compressed 240p YouTube video.

You can find the film on YouTube, but here's the novel too.