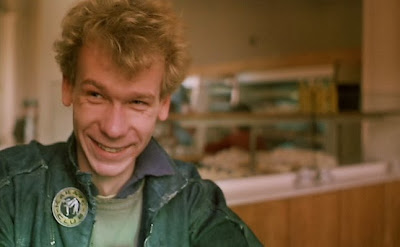 I was sad, and had been for a while, about international catastrophe, and about entropy, and about the rising tide of British racism, and the fact that the public and the media are not unsympathetic to this terrible thing, and because I had recently watched 'Nicholas and Alexandra' (1971), which is not a very happy film, though I think it worth watching.  So I decided to lighten my day by viewing a movie.  I had two hours in the middle of a working Friday, and the films I had set aside for The Penciltonian were all too long for that.  I needed something shorter, so I watched 'A Short Film About Killing', which is deeply unhappy but seemed to help.

It's a film by Krzysztof Kieślowski, who made the probably-more-famous Three Colours Trilogy, and whose 'Dekalog' I watched a few years ago, after hearing comparisons between it and 'Heimat' (1984).  'Dekalog' is a series of ten one-hour films for television, based loosely around the Ten Commandments, which left me with the impression that Poland (or at least, Soviet Poland) was a cold, cold, miserable place, always snowy and without hope, and that the main occupations there were dying and being cold while travelling short distances.  They were extremely well-made, and compellingly watchable, and two of the most striking were expanded into slightly longer versions for cinema release.  'A Short Film About Killing' is one of those two.  It may sound bleak, but the other, 'A Short Film About Love' wasn't radically more cheering. 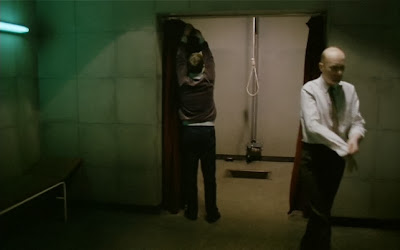 This is a film about a young man, Jacek, who kills a stranger, a taxi-driver selected apparently at random.  Not because of some feeling of Nietzschean superiority, as we saw in 'Rope' (1948), but, perhaps, because he's sad, and sees no prospects for himself, or for other reasons undisclosed or barely hinted at.  Perhaps he thought it would be easy.  It isn't easy - he tries to strangle him with a rope, but it turns into a horrible ordeal, horrible for everybody involved, and horrible to watch.  We've watched the Jacek going about the city, and he doesn't seem unpleasant or unreasonable, he just seems disaffected with life - and we've also followed the taxi-driver, who has spent his day declining to pick up customers.  He picks up the wrong one in the end.  And we've been watching Piotr, a sensitive young lawyer with nice hair, who passionately opposes the death penalty, and who, a year later, has to defend Jacek.

Here, as in the hour-long version from the 'Dekalog', we cut straight from the murder to the end of the trial.  This isn't like a lot of murder stories.  There's no investigation of clues, no sense of how Jacek was caught.  We see the murder, then we see the last seconds of the trial, and then we lead up to the other killing, the execution.  It's a philosophical, devastating piece.  Perfectly, horribly directed, though it seems somehow inappropriate to praise the art when the message is so grim and so important.  Something has been done to the lenses or the grading to make the world around Jacek dauntingly dark and murky, as if wherever he moves he's walking into the dark.  He's distressed towards the end of the film, but at the start he's almost emotionless, except once, when he catapaults a spoonful of coffee at a cafe window to amuse some children.  He smiles at this, the only time he smiles in the whole film.  A clip of his brief, uncharacteristic smile was used in the opening titles to 'Dekalog', and once I knew its context, its use seemed terribly, terribly unfair and cruel.

I think you should watch this film, but I understand why you don't.