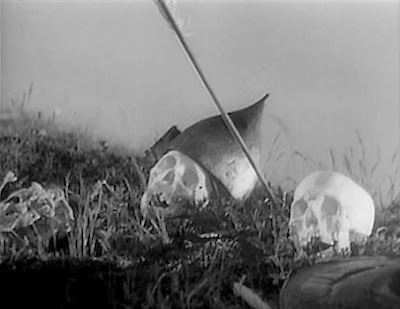 Alexander Nevsky had terrible hair, but a nice tunic.  He lived a nine-hundred-ish years ago, and was a prince and a saint and a general all at once.  He was the Christian Mohammed, the Orthodox Jeanne d'Arc, and he kept a peace with the Mongols, that the Russians of Rus might war against the Teutons, who were all a load of jerks.

The film is directed by Sergei Eisenstein, who made that other handsomely-edited propaganda piece 'Battleship Potemkin' (1925).  Like that film, 'Alexander Nevsky' is much easier to appreciate than to enjoy, though it surely has its merits.  One such merit is the famous musical score by Prokofiev - at least, I've often heard it's famous.  I wasn't sure I recognised it, but it had a great power to make me exclaim 'uh oh' and (more crudely) 'oh crap' at my television whenever it indicated the stirrings of impending catastrophe.  The Teutons, you see, are very horrid enemies, and whenever the film cuts to them in their vast and amazing helmets the dialogue disappears and the music takes over.  Though 'Алекса́ндр Не́вский' is a talkie, it's a silent film at heart, meaning the Catholic foe are presented for the most part as mute, unutterably malign, communicating only through helmet-size and loud instruments.

The other thing for which the movie is famed is the battle on the ice, which takes up the latter third of the duration.  It's a tremendous spectacle, and it left me thinking that Eisenstein could have made a really watchable 'Birth of a Nation' (1915).  At the time it was the greatest battle in all of cinema, and it's hard to know when it was surpassed.  The battle is immensely long, showing the overall flow of the fight, and great amounts of detail, from seething crowds to small moments of character or comedy.  It's easy to see how we got from this to The Battle of Helm's Deep, and though I'm sure Tolkein had some experience of real-life battles I wouldn't be surprised if he had seen and enjoyed this film.

I thought I would like Alexander more than I did.  He turned out to be rather a dull sort of fellow with little to humanise him.  He did his job, winning the war, well and functionally, and showed little reason to be posthumously canonised.  A fair résumé for a hero in the age of Stalin, but not great for a movie protagonist.

Don't buy the DVD - the print is soft and shaky - not to an offensive degree, but it could look much better.  Get yourself the soundtrack instead, which comes with Prokofiev's music to 'Lieutenant Kijé' (1934) too.