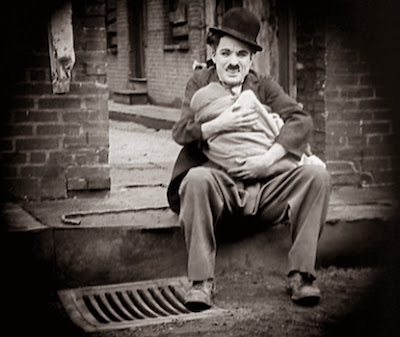 I'd nearly gotten through the whole project without watching any Chaplin, and I'd almost filled the 1920s with foreign-language films (not that this is especially noticeable when they're all silent).  'The Kid' goes some way to rectifying both of these things.  I spent a great many years with a very fixed idea of what a Charlie Chaplin film is like, and was surprised and delighted when I finally saw 'The Great Dictator' (1940) and found it to be extremely funny, rather emotional, and not at all what I expected.  Since then I've enjoyed 'Limelight' (1952) and not been wholly convinced by 'The Gold Rush' (1925) though in the latter case I wasn't watching the silent original, but a later version which dubbed sound and dialogue over a film that never needed them.  'The Kid' is the first time I've actually seen Charlie Chaplin in a silent movie.

The concept, in short: a woman 'whose only sin was motherhood', abandons her newborn baby in a stranger's car.  The crooks who then steal the car are alarmed by the baby, and leave it by some dustbins, where it's discovered by a tramp - it was still acceptable to call people tramps back then - who is inspired by the heartfelt note left by the woman, and raises the baby as his own.  Five years later the tramp and the kid are still living quite happily together in a situation of dire but endurable poverty.

Chaplin (credited as Charles, rather than the more familiar Charlie) wrote and directed the film, plays the lead and composed the music.  This sort of monomania is excusable, as all the elements are excellent; Chaplin was an extremely talented man, and applied his talents with good judgement, so it's not without reason that he became incredibly famous.  As in his other films, he manages to couch very silly comedy in a sentimental story - not saccharine, but highly emotional, with reasons to really care about the characters.  He has some serious social points to make about poverty and the tremendous stigma attached to single or unmarried mothers, and makes them here, in the midst of all manner of slapstick and myriad laugh-out-loud moments.

I could write much more, but it's a short film and a silent one, so will leave the rest as screen-shots and captions.