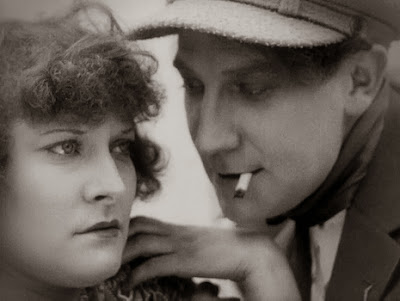 1923 offered me a number of temptations.  I was urged towards 'Safety Last', the Harold Lloyd comedy, though I couldn't find it on region 2 DVD - or perhaps the original version of 'The Ten Commandments', the remake of which I've occasionally enjoyed.  I felt, though, that since almost half the films I'd watched for the project have been American I might do better to watch something European.  Despite the fact that the films are silent, there are, or were, big enough cultural differences between countries that the whole flavour of a French film is extremely different to that of an American film, and so on.  In the end I was tempted by 'Cœur Fidèle'.  Firstly, it had been released on blu-ray, which is rare enough for ancient films that it (currently) usually means they're either very good or very culturally significant.  Secondly, it has an 'œ' in its title, and what mortal man can resist a good 'œ'?

Director Jean Epstein was a stylish fellow, and by all accounts a great director, and chose to tell an extremely simple story with great directorial innovation.  What we have, then, is an uncomplicated melodrama which is all about extreme close-ups of faces, balled fists and reactions.  I've complained at length about the lack of close-ups in 1910s movies, but here, in 1923, they're very much in evidence.  Epstein makes a memorable drama of this tiny story, using sophisticated fades, and new ways of showing us two ideas at once.  The art and the story are as much in the hands of the director and editor as the screen-writer.

The film wasn't at all popular with audiences when it was first released, and I can see why: it asks a huge amount of patience and attention from its viewer, as its deliberately simple story unfolds.  While I admired the techniques, I found myself wishing for something more surprising or interesting in the narrative.  I appreciate great direction, but it's stories that really excite me.  It didn't help that 'Broken Blossoms' (1919) had a very similar content: the horrible jerk, the bland hero, and the threatened, incapable woman who gets to do all the acting.

Having seen 'Cœur Fidèle', I never need to watch another silent film - at least, not as part of this viewing project.  I've covered the first two decades of The Pencilonian (and much besides), and have no more gaps to fill in the silent era (which was, broadly speaking, everything before 1927 and most things before 1931).

But there are plenty I'll revisit, some almost immediately, and I'm curious to look out some of the later silent films, the sort of thing we hear about in 'Singing in the Rain' (1952) and 'The Artist' (2011) - indeed, I'd be curious to see 'The Artist', since it's a silent film made in modern times (though aping the style of the classic silents, of course).

Music videos are probably the most prominent display for silent films these days, with dialogue-free stories told to suit the music, rather than the other way around.  I made my own silent film a year or two ago, 'Pencilton and the Giant Spider' (2012), which isn't as good as 'Cœur Fidèle', but which is shorter and features more fluffy animals.