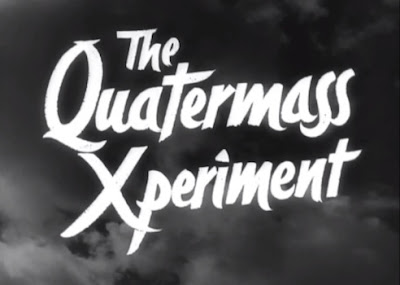 This popped up on BBC iPlayer (and presumably on real live BBC television too, but it's some while since I last watched anything as it was broadcast, for this is the 21st Century), and since I always check out their monochrome films (it being a cheap way to fill Penciltonian gaps), naturally I investigated this one's year, and was glad that it fit.  I've a natural interest in Quatermass, it being classic British sci-fi, a rather different proposition to classic American sci-fi.  The three Quatermass serials were so heavily plagiarised by early 'Doctor Who' that it's nice to finally see where all those story ideas originally came from.  Ideally I'd be watching the TV original from 1953, but it's largely lost from the archive, and besides would not fit with my own Penciltonian Xperiment.

The film is set around London, no longer the war-torn London it was a decade before, but not yet the swinging London of the sixties.  It's an interesting and lesser-acknowledged gap, and well suits Nigel Kneale's penchant for dark, pessimistic, xenophobic tales about how, though we're a nation of ingenious innovators, the universe is utterly malign and is coming to kill us for no reason we can comprehend.

Bernard Quatermass is not a Briton, as he was in the TV version, but the American Brian Donlevy, who gives a stiff and uncharismatic performance that's very hard to like.  He's meant to be an anti-hero, a man of science with serious business to attend to and little time for the media - but even so, I've rarely seen somebody so dull in the lead.  It's doubtless deliberate, and he's paired with a lively policeman, the good-humoured Inspector Lomax (Jack Warner, who went on to be Dixon of Dock Green).  A returning rocket - a great novelty in these early days of the space-age - presents them with a mystery, a crime, and an unknown form of life, prompting them to launch the two interlinked investigations, with Quatermass in pursuit of scientific facts and Lomax keen to determine whether a murder has been committed by Victor Carroon, the surviving astronaut.

Victor Carroon is played by the scary-faced Richard Wordsworth.  While all around him jabber in the polite accents we might see in 50s pastiches, Carroon is sweatily silent.  While talk of rocket-ships and paperwork makes this sound a sci-fi procedural, the film is a horror at heart - the first Hammer horror, indeed - with Victor Carroon is its monster.  It's a horrible performance, murderous and implacable, with the astronaut infected by something he cannot resist, compelled to smash and to drain life, leaving behind wizened husks which are still unpleasant to look upon today.

P.S. The film features an amazing one-scene cameo from Thora Hird as a gin fiend.  Despite an attempt to watch many films of diverse kinds, my century of cinema (of which I have now completed three-quarters) has somehow managed to include two films with Thora Hird, but none with Arnold Schwarzenegger or Kevin Bacon.  I'd never really thought of her as a movie star.