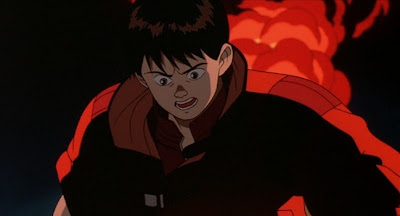 I've had 'Akira' recommended to me twice, once by a poster and once by a person.  The first case was at university, on the wall of a friend called Neil.  Now, he and I disagreed significantly on some key issues (crucially he did not hold back on branding my Christianity, anybody's indeed, 'stupidity', with an agitated regularity), but it was apparent that his aesthetic suggestions were greater and more generous than his theological ones.  It's thanks to him that I discovered Peter Greenaway, Michael Nyman, Apple Macintoshes,  'MacGyver', 'Garth Marenghi's Darkplace' and port (the beverage, not the nautical direction) all of which have brightened my life this last decade.  So I was always confident that 'Akira', which he advocated from his wall, would be worth my attention.  I never sought it out until a rather more recent friend, a young filmmaker named Charlie, suggested it as anime worth the watching when I commented that The Penciltonian hadn't yet touched the cinema of Asia.  As you may recall (clue: you probably won't) I once expressed a desire to watch a film from every continent.  It really shouldn't have taken me this long.

It's a handsome film, its animation far above what little anime I've seen on television.  At times it can almost look real - but heightened, with the lights of fast motorbikes blearing and ghosting long after the vehicles have left the screen.  The pseudo-realism of the animation style gives director Katsuhiro Otomo greater control over framing and lighting, and on when, to the split second, characters or objects enter the screen.  The style allows for calculated depictions of violence - bullets hitting dogs, or gang-members falling from bikes - slow or fast, but perfectly rendered, things that would be too horrid or simply unconvincing using actors and special effects.  Rumours have abounded for a decade about a proposed live-action remake, but I don't think it would retain the visceral flair.  It would divide the world into real and CGI - two things that still don't quite blend, one always knows which is which - rather than the single, consistent but visually beautiful style presented here.

I feel at a disadvantage, talking about 'Akira', as I know almost nothing about the culture of Japan, ancient or modern.  Films, especially science-fantasy like this, often draw on a society's deep-rooted preoccupations, folk traditions and enduring fiction of previous ages.  'Miracle on 34th Street' (1947) or 'Daleks: Invasion Earth 2150 AD' (1966) would make far less sense to a viewer without a knowledge of the countries and cultures concerned, and for much of 'Akira', though I enjoyed the film moment by moment, I felt I lacked any grasp on its references and allusions, whether consciously or unconsciously included, so was missing the bigger picture.  It's the same uncomfortable detachment I felt when watching 'Spirited Away' (2001), and may have led me to misread the films.  For the first half of this movie I'd assumed the third world war (which struck on the day after St Swithin's in 1988 and wiped out Tokyo) was a nuclear one, since Hiroshima is the only recent Japanese history that I really know - and I assumed a growing sphere of sci-fi destruction to be a cloud of nuclear mushroom.  This was not, as I'd supposed, a film of angst for the forties, nor were the aged and elusive children tragic nuclear ghosts.  This was something newer, quite a different set of ideas.  I'm glad, I think, or the film might have been far heavier than it was.

I don't want to say too much about the film.  As I've mentioned, it was commended to me without any clue as to its contents, and I feel you'd do well to go in without too much of its plot spoiled for you.  What's more, I hardly feel I've absorbed the film on my one viewing.  Since I was offered the option to watch it dubbed or subtitled (I chose the latter) I'd like to see it again, taking the other option, before I'll really feel confident about what I've seen.  The only other things I'll note are (firstly) that I'm always thrown by anime's habit of putting comedic lead characters, prone to all manner of slapstick, in otherwise fairly humourless films, and (secondly) that the film's climax is physically disgusting, but attractively so, and was unlike anything else I've seen in the year's viewing.