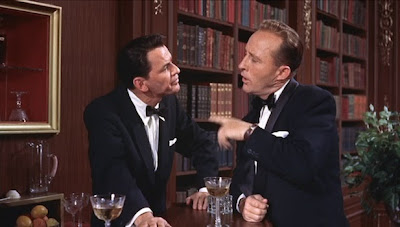 I like it when films open with overtures, long expanses of time and music even before we reach the opening titles, when one can sit and stare at the word OVERTURE on the screen and soak up some atmosphere and mood, so that when the big melodies of the incidental music or (as here) the songs arrive they have a familiarity and all seem to hold together.  The overture is also just enough time to make a decent cup of tea, and to peanut-butter some cheeses.

The film stars Bing Crosby, alas now regarded as a physically abusive churl, and Grace Kelly, who (since I have no class) I have hitherto known only as a Mika track, with Frank Sinatra, who I've a notion was perfectly lovely, or else perhaps some kind of gangster.  It's quite a cast - Grace Kelly's first musical and last movie, and it's the first time Crosby and Sinatra shared the screen.

It's also a musical and the songs, by Cole Porter, are fine and dandy.  The most famous is surely 'Who Wants to Be a Millionaire', sung by the only characters in the film who aren't, and it's a catchy piece, with appropriate choreography.  I'm not left humming any of the other songs, but it was all fine musical fun.  The title track, at the top of the film, is an excellent jazzy number sung by Louis Armstrong with a cigarette-holder.  'End of song, beginning of story,' he cries.

I really like Grace Kelly's costume in this film, in particular a floor-length white dress which incorporates a cape of the same length and material, a design I'd associate with the Indian subcontinent, but which Kelly carries off magnificently.  By the time the film was released she was princess of Monaco.  Somehow it seems inevitable.  The men all wear suits, which may be attractive but are pretty dull, but Grace's arrays seem worthy of note.

As to the plot?  Well, Grace Kelly is getting married, but to whom?  She reaches the eve of her wedding-day with a three way choice, her fiancé, her ex-husband, or a nosey reporter.  It's plainly not going to be her actual fiancé, as he's too little fun, and is only played by John Lund, while the other two are Crosby and Sinatra.  Still, between these two it feels it could go either way.

In the end, it's a film about rich people having rich people fun, which doesn't particularly appeal (though at least the film is honest - most films we see are peopled by actors no less wealthy and perhaps equally whimsical, though at least we're seeing them at work).  It does, however, make a pleasant Sunday afternoon's viewing.

It's also a cool film about cool people being cool.  Who's coolest?  Louis Armstrong, of course!