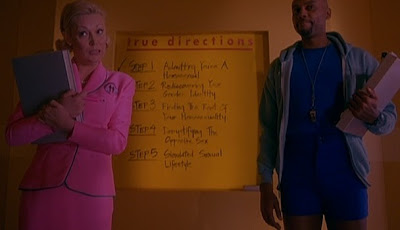 So Megan (Natasha Lyonne) is a cheerleader.  She's dating the captain of the football team, and so on and so forth.  She doesn't much like kissing him (and when you think about it, kissing is an absurd and alarming act, though as I recall an enjoyable one), but otherwise looks set to do the appropriate American thing, and settle down and get married.  Until, that is, her family put it to her that she's gay.  On the contrary, she protests, but they're most insistent.  The thought has never passed through her conscious mind, but in no time she's packed off to a correction camp, where stern leaders seek to convince her of her homosexuality, then 'cure' her, and others of her ilk, using a perfectly charmless five-step plan.

So starts this wonderfully cheap-looking film; its tall-screen aspect ratio (alas, cropped to 16:9 for the DVD release) and dearth of fancy make-up or lighting leave it with a pleasing humility, a look that owes more to the 50s or 70s that the slick 90s.  Several things left me expecting the film to be a broad comedy: the DVD box, the film's dazzling colours, the particular direction, and the oppressive villainousness of the main antagonist - but despite this, there's a strange absence of the overtly comic, of jokes or obviously humorous situations.  Not that there's anything really missing, as such - the film remains excellent fun, constructed with a wonderful lightness of touch - but at its core is not humour but a rising despair, a dreadfulness.

So anyway, the Umbridge-like head of the camp berates Megan and her new friends into shameful acknowledgement of their gayness, and seeks first to gender them.  Pink and washing up for girls, blue and sports for boys - that horrid set of heteronormative stereotypes that, aside from anything else, have precious little to do with who has sex with whom.  I realise I oughtn't to be outraged by the outlandish petty villainy of fictional characters, but it never ceases to agitate me that pink (an excellent colour, if not the best) is mandated for half the population but utterly forbidden for the other half, a pair of complementary social diktats as terrible as one another, and one we're all taught from youth.  Mary Brown (Cathy Moriarty), the disciplinarian at the head of the camp believes this is the best way back to straightness, and that such rigorous, tedious normality is the only acceptable option, the only true good.

In the seventy films I've watched so far for this Penciltonian project, no villain has so easily raised my ire as Mary Brown.  Of course, it's possible that in such an extreme antagonist, the film is using a straw man - except I'm pretty sure that such camps do exist, where people are taught to despise and repress parts of themselves that cannot ever truly be changed.  This satire may heighten the performances and draw attention to the hypocrisies, but seems to represent something that does indeed exist in the world.  It's an unpleasant prospect.

My lodger, Saskia, showed me this film about a fortnight ago.  We consumed it in a double-bill with Michael Cera comedy 'Nick and Norah's Infinite Playlist' (2008), a film which was an amply enjoyable indie romance, if perhaps a little too aware that it was being an indie romance.  'But I'm a Cheerleader' seemed less polished, less studio-constructed, and was all the better for it - I commended it at the time for actually being about something.  This film left something to be angry about, and had the sweeter romance, as Megan finds a complicated but engagingly peaceful relationship with Graham, a girl at the camp less naïve and less happy than her, who faces the threat of disinheritance from her family if she fails to turn straight.

I couldn't help but wonder whether this film was chosen with an ironic pointedness, since we watched this the night before I went off to run a Christian holiday-camp for 14-18 years-olds, whether perhaps the film's colour-coded borstal, with its ineffectual brain-washing and campaign of shame and condemnation is how my Scripture Union camp, 'Transformers' is imagined by some.  Needless to say, mine was not an exercise in oppression, but something far freer and more welcoming, and pushed no agenda on sexuality, being in general far more interested in God's love, and computers, and board games and such.

It seems curious to defend it against such an extreme example, but since I long ago met somebody who supposed that Christian holiday camps are concentration camps (invoking Godwin's law, indeed) I might as well say something of its content: the young people came because they thought they might like it, and returned because they did like it.  It's a computer camp, rather than a running around one, with a good half of the day given over to technical activities, those being programming, photography, 3D graphics, video and music production.  The projects, their tone and content are whatever the young people want to make, though we on the team lend a hand wherever we're asked for.  The rest is eating, worship and Bible study.  The latter are not, to my mind, indoctrination or normalisation, and not nearly rigorous or emphatic or competent enough to be the brainwashing my friend supposed in the aforementioned conversation.   They're there because we believe there is hope beyond death, and hope before it too, and that it's kind-of a big deal, and it would be churlish of us not to tell people all about it.

If you're curious about the sort of things the technical activities produce, by the way, here's 'The Face-Taker', a horror film the young people made toward the end of last week.  The same Youtube channel contains dozens more short movies we've made from the last few years.  I'd especially recommend 'Earth Pie', 'Lions and Tigers and Bears, Oh My', and any of them, really.  And I'm always glad to talk about the camp in person, too; I've been disappearing off to it each August for many years but rarely find the opportunity to properly enthuse about it.

I seem, now, to have sauntered so far away from 'But I'm a Cheerleader' that I feel I'd do well to wrap up.  It's an enjoyable film which places an immediately likeable main character in an alarming situation which fails to put her down, but rather brings out all her merits.  There's a message worth hearing and a beautiful romance, so I could hardly fail to recommend it to you.
...and here it is on DVD, not that this was what I was driving towards.